On June 6 the June Duke/CFO Magazine Global Business Outlook Survey (pdf) was released.  It contains a variety of statistics regarding how CFOs view business and economic conditions.

In this CFO Survey, I found the following to be notable excerpts:

U.S. finance chiefs plan to expand workforce by 2.5 percent, on average over the next year. Nearly 30 percent of U.S. firms say their employees are “maxed out” — working at full capacity — and 60 percent are looking to hire.

The Federal Reserve’s fiscal moves appear to have little impact on corporate investment.  “CFOs are telling us that they are building in large contingencies before going ahead with investments,” said Campbell Harvey, a Fuqua finance professor and founding director of the survey.  “The size of this buffer exceeds 4 percent per year.

The CFO survey contains the Optimism Index chart, showing U.S. Optimism (with regard to the economy) at 56, as seen below: 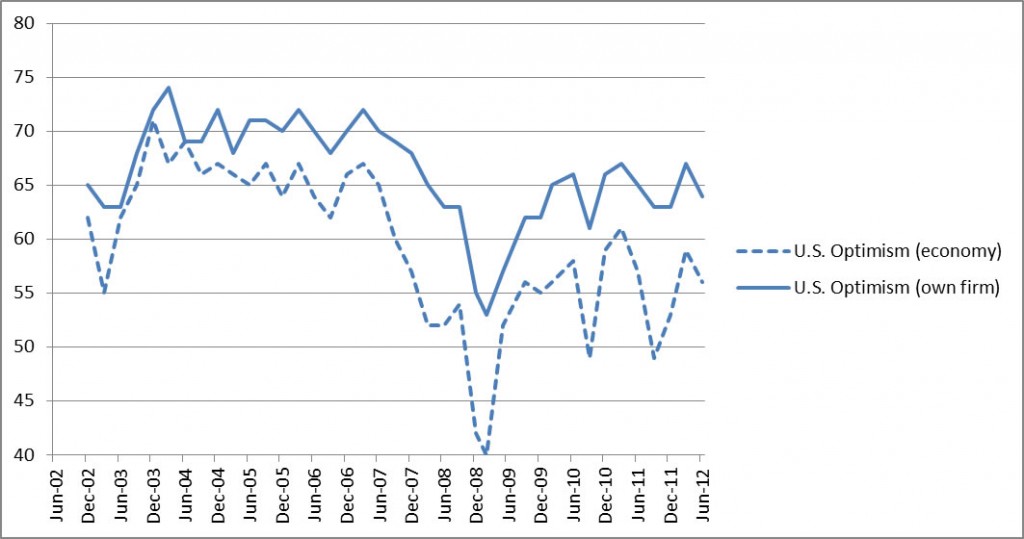 It should be interesting to see how well the CFOs predict business and economic conditions going forward.   I discussed various aspects of this, and the importance of these predictions, in the July 9 2010 post titled “The Business Environment”.

I post various economic forecasts because I believe they should be carefully monitored.  However, as those familiar with this blog are aware, I do not necessarily agree with many of the consensus estimates and much of the commentary in these forecast surveys.