Frequently, one hears of the high profits and large (from a historical perspective) cash positions of companies.  While this may be true more or less, especially among larger companies, I believe that it depicts the current overall business environment in an overly positive light.

As I have written of previously, there are significant problem areas in today’s business environment.   While many firms have been able to achieve high profits and cash flow despite these problem areas, the manner in which they have done so is, in many cases, suboptimal.  As well, special circumstances have aided in achieving such profitability.

Of greater concern is how businesses will fare going forward as this economic situation unfolds, especially if one believes as I do that greater economic weakness will be forthcoming.

As I commented in the April 15 post, “I believe that many firms will continue to face very challenging conditions, and many will ultimately fail, unfortunately.  I base this belief on a number of factors including my overall economic assessment as well as business-specific factors.”

One reason for this outcome is what appears to be an inability for businesses, in general, to predict adverse economic conditions.  This inability was especially acute during the economic weakness that unfolded during the “financial crisis” of latter 2008 and 2009.  Of course, businesses weren’t alone in this inability as virtually all professional economic and financial forecasters also failed to predict such weakness.

Although it is difficult to visualize the extent to which businesses failed to foresee the economic downdraft of 2008, I think that the following chart can be used, at least to some extent, as a proxy of such.  This chart is from the June 29, 2010 ContraryInvestor.com commentary and shows the results of the Business Roundtable CEO Survey.  Notable is the elevated reading through mid-2008: 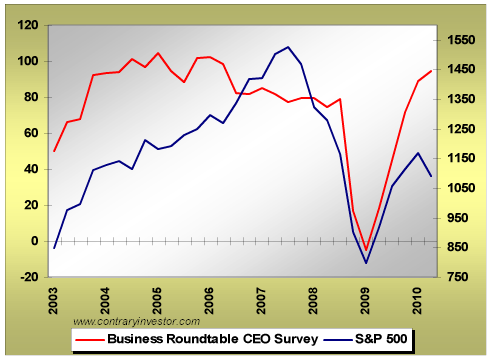 The other issue, aside from whether businesses can predict oncoming economic weakness is whether they can successful adapt to such conditions in a timely fashion.

Of course, there are many remedies and actions companies can take to overcome adverse economic conditions.  However, the availability of these options is predicated by what actions each firm has already taken.