In the CEO survey, of particular interest is the CEO Economic Outlook Index, which decreased to 77.6 from 109.9 in the 2nd quarter.  Also stated in the report, “In terms of the overall U.S. economy, member CEOs estimate real GDP will grow by 1.8 percent in 2011, a decrease from the 2.8 percent projected in the second quarter of 2011.” Also, as seen in the Press Release:

“The findings of this survey show declines in each category of economic measurement,” said Jim McNerney, Chairman of Business Roundtable and Chairman, President and CEO of The Boeing Company.  “While we see strong business fundamentals in America still, the quarterly survey results reflect increased uncertainty among CEOs concerning the economic climate and business environment.”

In the CFO Survey:

Chief financial officers don’t foresee a double-dip recession, but doubts about the strength of the economy have pessimists outnumbering optimists by more than five to one in the United States. Business spending is expected to grow, though more slowly than last quarter, and hiring will continue at a sluggish pace.

Capital spending in the U.S. is expected to see solid growth of 4.5 percent, but that is about half the pace predicted last quarter. One-third of firms say they’ve slowed planned spending this year, citing economic uncertainty and funding constraints.

Domestic U.S. employment is expected to rise about 1 percent in the next year, which would likely leave the unemployment rate stalled around 9 percent.

The CFO survey contains the Optimism Index chart, showing U.S. Optimism (with regard to the economy) at 49.4, as seen below: 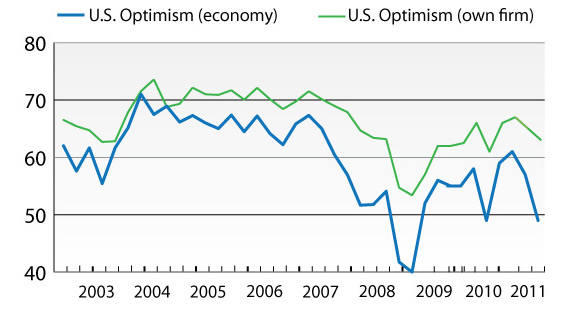 It should be interesting to see how well the CEOs and CFOs predict business and economic conditions going forward.   I discussed various aspects of this, and the importance of these predictions, in the July 9 2010 post titled “The Business Environment”.