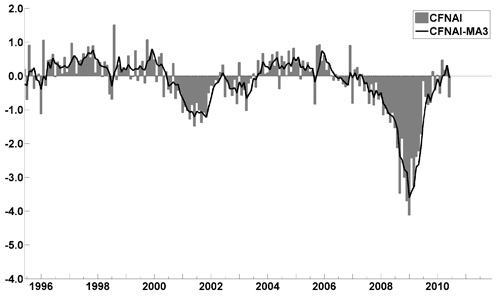 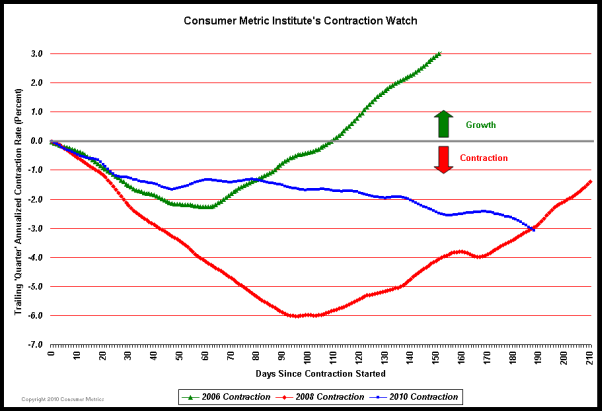 “The July update of the USA TODAY/IHS Global Insight Economic Outlook Index shows real GDP growth, at a six-month annualized growth rate, slowing to 2.5% in December. The end of government stimulus spending and inventory buildup combined with continuing high unemployment, a weak housing market, tight credit and high debt are behind the slowdown.

Four of the 11 indicators were positive in July, down from five last month and the lowest number since USA TODAY first published the index in June 2009.”

An excerpt from the June 30 Press Release:

““The ESI’s modest and steady rise over the last couple of months is a positive sign, but the U.S. is not out of the woods yet,” Dow Jones Newswires “Money Talks” Columnist Alen Mattich said. “Anxiety about the U.S.’s employment conditions and questions around Europe’s stability are key concerns that are unlikely to subside soon.”

The Dow Jones Economic Sentiment Indicator aims to predict the health of the U.S. economy by analyzing the coverage of 15 major daily newspapers in the U.S. Using a proprietary algorithm and derived data technology, the ESI examines every article in each of the newspapers for positive and negative sentiment about the economy. The indicator is calculated through Dow Jones Insight, a media tracking and analysis tool. The technology used for the ESI also powers Dow Jones Lexicon, a proprietary dictionary that allows traders and analysts to determine sentiment, frequency and other relevant complex patterns within news to develop predictive trading strategies.”

“”The indicators point to slower growth through the fall,” says Ken Goldstein, economist at The Conference Board.”