I have been following The Consumer Metrics Institute’s work since March.  I have previously written two posts focusing on their work (both found on March 31), as well as included it in the monthly “Updates On Economic Indicators.”

To briefly summarize, I find their work and methodologies very interesting, especially given that they appear quite different than other such measures that purport to depict/predict economic activity.

Here is one of their current charts, that of the Daily Growth Index: 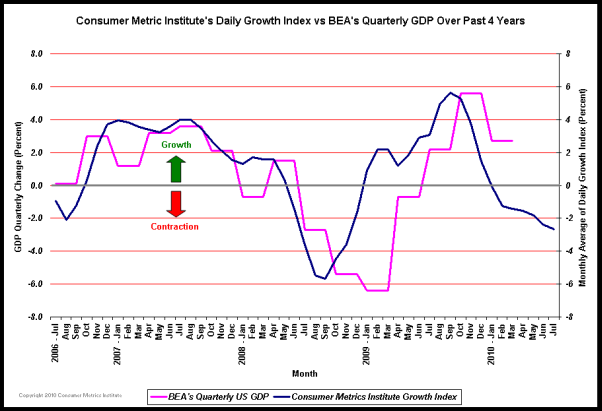 Given its proprietary methodologies and relatively limited history, it seems likely that varying interpretations of The Consumer Metrics Institute’s data can be supported.   My interpretation of the chart is that the growing “rift” between GDP and the CMI’s Consumer Growth Index is significant.  This begs the question as to which trend will prove accurate going forward; that of GDP growth around 3% (that which is the current consensus among economists for both full-year 2010 & 2011) or that of the CMI’s Growth Index, which seems to be indicating some type of impending negative (perhaps significantly so) GDP growth rate?

Of course, one can argue that the CMI’s growth rate can suddenly materially increase, which would likely support a positive GDP growth rate.   Of course, such a sudden increase is possible, but my “guess” (which is seemingly all that one can offer, given the proprietary nature of the data) is that such is unlikely.

Of further note is the CMI’s “Contraction Watch” chart (not shown) and its implications.

Of course, the CMI’s readings of weakening economic activity are not entirely unique.  ECRI’s recent WLI Growth readings have generated much discussions lately given the WLI Growth’s significant and rapid decline.