On August 1, 2014, the Zillow Q3 2014 Home Price Expectations Survey results were released.  This survey is done on a quarterly basis.

The panel also said they expect U.S. median home values to end 2014 up 4.6 percent, on average, and to exceed their 2007 peak levels by the end of 2017, roughly a decade after the housing bust and ensuing recession began. The survey of 104 economists, real estate experts and investment and market strategists asked panelists to predict the path of the U.S. Zillow Home Value Index through 2018, and solicited opinions on the age of homeowners, the homeownership rate and the impact of rising mortgage interest rates on home sales volume. The survey was sponsored by leading real estate information marketplace Zillow, Inc. and is conducted quarterly by Pulsenomics LLC.

Panelists predicted the U.S. Zillow Home Value Indexiv would rise 4.6 percent year-over-year by the end of 2014, to $177,895, and expected the pace to slow in each of the next four years. The most optimistic groupv of panelists predicted a 5.6 percent annual increase in home values this year, on average, while the most pessimisticvi predicted an average increase of 3.7 percent. 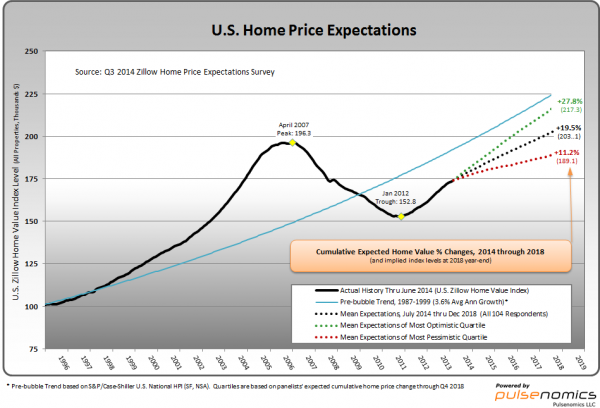