There has been much written as to the future of residential real estate prices.  The consensus appears to be for very slight appreciation for years.  This consensus is echoed in the MacroMarkets September 2010 Home Price Expectations Survey Press Release (pdf).  Here is a chart from that survey that shows the past history (green line) as well as future expectation (red line):

As one can see on this chart, real estate prices (here measured by the S&P/ Case-Shiller U.S. National Home Price Index) really started their ascent in the mid-90’s.

Here is another chart, reflecting the CoreLogic House Price Index of July 2010.  The chart is courtesy the CalculatedRisk blog with annotations by John Lounsbury, as noted: 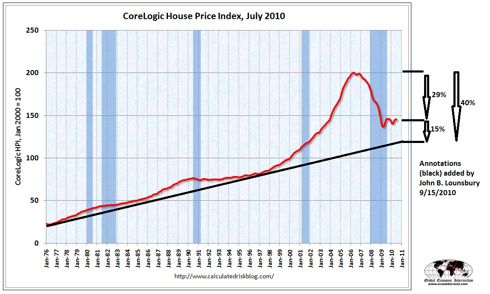 In this chart it is again seen that the pronounced ascent in real estate prices began in the mid-90s.  As well, as seen by John’s annotations, the market has experienced a roughly 30% fall from its peak, and a price reversion to the trendline from January 1976 would represent a further 15% decline.

I have written extensively about various facets and dynamics of the residential real estate market.  My analysis indicates that this is a market that is exceedingly complex, due to a variety of hard-to-predict factors.  These factors include such issues as strategic default trends, “shadow inventories”, redefault rates, and the relatively new confusion concerning foreclosure propriety.  As well, there is immense direct and indirect government intervention in this market, which presents further complexities.

Assessing the future path of real estate prices can be done in a variety of fashions; as well, many different measures can be taken into account.  There are reams of data on a myriad of statistics.

For purposes of this post, I would like to focus on the price trends as shown in the two charts above and raise four issues with regard to the future of home prices.  Although I don’t necessarily agree with the methodologies employed by these indices,  they have common acceptance.

The first issue I would raise is whether trendlines can be used to assess the trends of house prices.  The issue is debatable.  Whereas trendlines have proven validity in stock price movements, I would question as to whether such validity exists with regard to home prices.

The second issue is whether such trendlines (assuming their use in housing trends is valid) will serve as “support.”  I would offer that if the housing market is in a continuation of its long-running bull market, the trendline would serve as support.  However, whether we are continuing a long-running bull market in housing is deeply contentious.  My own view on the matter is that the housing market peaked as shown and is now on a decline.  As such, a trendline would likely not hold as support.

The third issue is that of ultimate support; i.e. a price floor.  Some believe that the “pre-bubble” price levels would serve as such a floor.  For example, if one believed that the real estate bubble started in earnest in the mid-90’s, such a level would serve as the ultimate price floor.  This seems logical as, in theory, the price inflation during the bubble’s excesses would be eliminated if the price were to return to the pre-bubble price levels.  However, I think this is erroneous logic on many fronts.  From a “technical perspective” it fails to consider a “reversion to the mean” that would result in a “price undershoot” to a level significantly below that of the prices of the mid-90’s.

The fourth issue is one of “bubble dynamics.”  Of course, the almost universal belief is that the housing bubble has “popped.”  I don’t agree.  As I have previously written, I believe the roughly 30% decline experienced to date, although incredibly damaging, is a “deflation” of the huge bubble as opposed to its “popping.”  Further supporting this idea is that each index has only fallen to levels last seen during a latter year of the bubble, approximately the 2003 period.

This “deflation” vs. “popping” nomenclature is more than semantics.  If the bubble has only “deflated,” as I believe, then the “popping,” and its pronounced accompanying damage, still awaits.

Lastly, one should keep in mind how supportive (ultra) low interest rates have been to real estate prices.   While such low interest rates are widely believed to be stable for the foreseeable future, a substantial uptick in rates would likely prove a significant headwind against the possibility of rising prices.

In summary, while many people have an optimistic view regarding future residential real estate prices, in my opinion such a view is unsupported on an “all things considered” basis.  Furthermore, as discussed, there exists outsized potential for a substantial price decline, unfortunately.