In previous posts I have discussed the Bond Bubble and its many facets, as my analyses indicates that the overall bond market is an exceedingly large asset bubble with immensely large and wide-ranging economic implications.

Since my last post on the Bond Bubble (the February 6, 2013 post titled “The Bond Bubble – February 2013 Update“) I have written various posts about interest rates and associated dynamics. 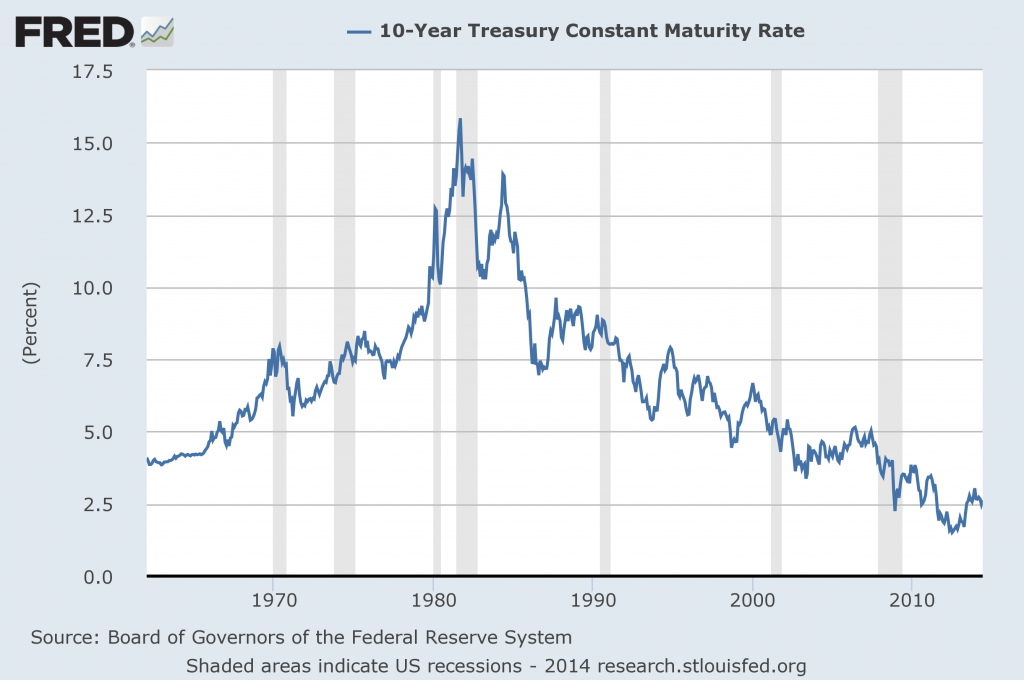 Data Source: FRED, Board Of Governors Of The Federal Reserve System; accessed June 23, 2014:

Here is another chart of the 10-Year Treasury Yield, from 1980 on a LOG scale, with a long-term trendline, and currently yielding 2.623%:

Perhaps one of the more striking aspects of the bond environment is that although 10-Year Treasury Yields are up significantly from their lows, various interest rates on less creditworthy securities are at or near their lows.  This can be seen in various securities and bond segments, both domestically and internationally, including the BofA Merrill Lynch US High Yield Master II Index chart, which shows a current yield (as of June 20, 2014) of 5.18% and its OAS Spread at 3.36%.

Of course, the question remains as to which direction interest rates, especially on the 10-Year Treasury, will take from here.

As I have explained in previous posts on interest rates and the Bond Bubble, such as the August 22, 2013 post “The Impact Of Rising Interest Rates,” what is particularly intimidating is the prospects for the economy and financial markets when the bond bubble finally “bursts.”  While the duration of this bond bubble makes (ultra) low interest rates seem sustainable – and by extension, “natural” – my analyses indicate that this interest rate environment is nothing of the sort.

Furthermore, relative to past rising interest rate environments, due to various current dynamics the coming increase in interest rates will be far more pernicious to the overall economy.

The perils of this bond bubble and its future “bursting” can hardly be overstated.