With the recent increase in interest rates, perhaps the paramount question is what impact a rising interest rate environment will have on the economy.

First, for reference, here is a long-term chart of interest rates from 1962, as seen in Doug Short’s post of August 17 titled “Treasury Yields In Perspective” :

As one can see, the overall trend in interest rates has been declining, dating back to the peak seen in the early-80s.

Although there are various areas which benefit from increased interest rates, from an “all-things-considered” basis rising interest rates have many problematic aspects for our current-era economy.  While 10-Year Treasury Yields were above 5% as recently as 2007 – with no seeming adverse economic impact – I believe that the economy will have difficulties “absorbing” higher yields far before that 5%+ rate on the 10-Year Treasury is again reached.

The impact of the recent rising interest rate environment is particularly noteworthy, not only because of the historically-rapid speed of its ascent, but also because, as I have commented before, my analyses indicate that interest rates can rise to levels much higher than generally expected.  I have written extensively about my belief that there is an exceedingly large bond bubble; if one believes that such is the case, the implications concerning the level of future interest rates is disconcerting.  A “deflating” or “bursting” of such a large bubble will have widespread negative impacts on the economy and markets.

For reference, below is a chart depicting the recent movements of various (3-month, 2-Year, 5-Year, 7-Year and 10-Year) Treasury yields: 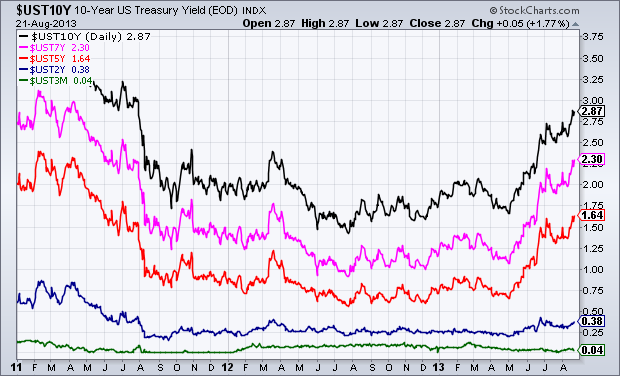