On September 20, the Zillow September 2012 Home Price Expectations Survey (pdf) results were released.  This survey is done on a quarterly basis.

An image from the brief on the September 2012 Survey, displaying survey responses by quartile,  is seen below: 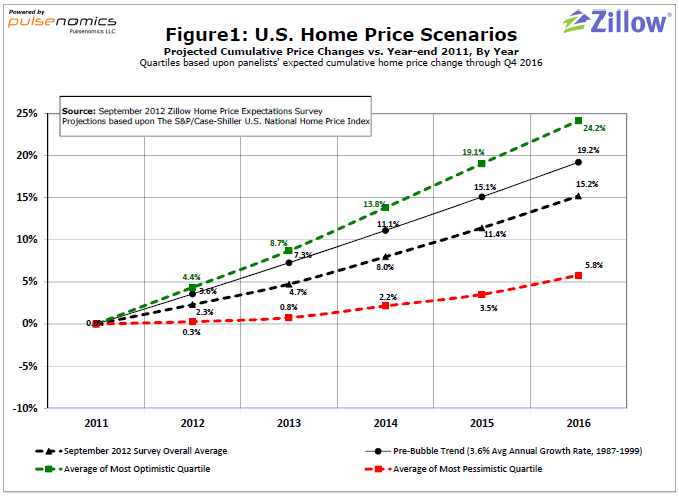 Other charts are also seen in the brief.

As one can see from the above chart, the average expectation is that the residential real estate market, as depicted by the Case-Shiller US National Home Price Index (NSA), will continually climb after 2012.

The detail of the September 2012 Home Price Expectations Survey (pdf) is interesting.  Of the 113 survey respondents, 5 (of the displayed responses) forecast a cumulative price decrease through 2016; and of those 5, only 1 (Gary Shilling) foresees a double-digit percentage cumulative price drop, at 15.21%.

For a variety of reasons, I continue to believe that even the most “bearish” of these forecasts (as seen in Gary Shilling’s above-referenced forecast)  will prove too optimistic in hindsight.  Although a 15.21% cumulative decline is substantial, from a longer-term historical perspective such a decline is rather tame in light of the wild excesses that occurred over the “bubble” years.