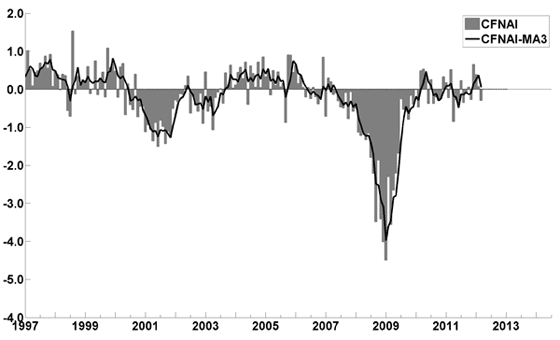 The February update of the USA TODAY/IHS Global Insight Economic Outlook Index shows real GDP growth, at a six-month annualized growth rate, increasing to 2.5% in March and April and then slowing to 2.1% in July. While employment, housing (mostly the multifamily sector) and consumer spending are slowly recovering, concerns about the Eurozone and world growth continue.

A chart of the WLI, Gr. since 2000, from Doug Short’s blog of April 20 titled “ECRI Weekly Leading Indicator:  The Growth Index Slips” :

An excerpt from the April 19 release:

Says Ken Goldstein, economist at The Conference Board: “Despite relatively weak data on jobs, home building and output in the past month or two, the indicators signal continued economic momentum. We expect a gradual improvement in growth past the summer months.”