In the CEO survey, of particular interest is the CEO Economic Outlook Index, which increased to 113 from 101 in the 4th quarter.  Also stated in the report, “In terms of the overall U.S. economy, member CEOs estimate real GDP will grow by 2.9 percent in 2011, an increase from the 2.5 percent expected in the fourth quarter of 2010.”

As well, “With today’s survey results, the last three quarters have shown steady improvement in the CEO economic outlook. Our CEOs see momentum in the economy over the next six months, with increased demand fueling greater investment and job creation,” said Ivan G. Seidenberg, Chairman of Business Roundtable and Chairman and CEO of Verizon Communications. “This shift continues a trend as reflected in recent employment data, with the private sector leading the way in creating more jobs.”

In the CFO Survey, “CFO optimism has increased, rising to the highest level since early 2007.”  Also, “Chief financial officers in the U.S. have a more optimistic outlook about the economy, with robust growth expected in earnings and capital spending. Overall employment is expected to grow slowly, though some job categories are in strong demand. However, an uptick in inflation would pose notable risks for many firms.”

The CFO survey contains the Optimism Index chart, as seen below: 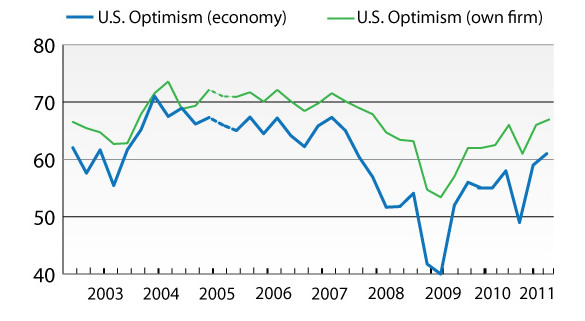 It should be interesting to see how well the CEOs and CFOs predict business and economic conditions going forward.   I discussed various aspects of this, and the importance of these predictions, in the July 9 post.