Here is a chart of CMI’s Daily Growth Index: (click on chart images to enlarge) 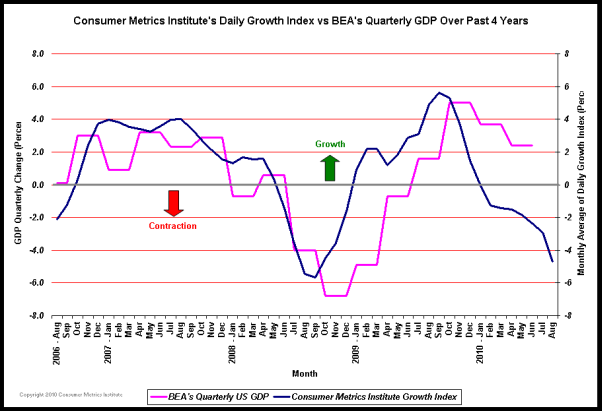 As one can see, the Daily Growth Index is rapidly approaching the low of the 2008 reading; perhaps more importantly there seems to be no signs of abatement in its downward trajectory.  Also of great importance is the rift between its reading and that of Quarterly GDP. 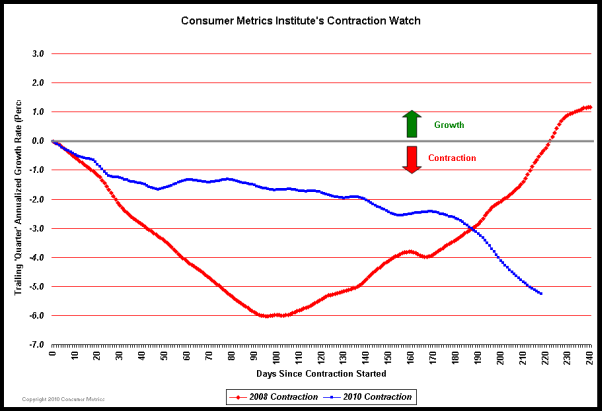 Here again, the readings are rather draconian, even when compared to the 2008 event.

Of course, before one can draw solid conclusions from CMI’s data, one has to have a solid understanding of the methodologies used.  This is difficult with CMI’s data as it is proprietary, and as such, it is much akin to other “black box” mechanisms where computations aren’t disclosed.

As well, as CMI stated in their August 20 commentary, “Remember that our data only reflects consumer demand for discretionary durable goods.”

However, from an “all-things-considered” basis, it would appear as if CMI’s readings present the most negative forecasts among popularly published indicators.

As I stated in the July 27 post, “It should be very interesting to see how the CMI’s readings evolve as compared to actual economic activity…”