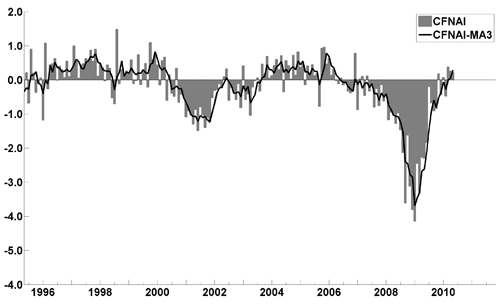 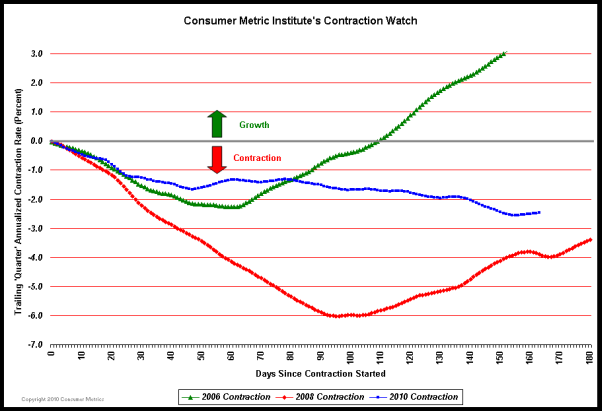 “The June update of the USA TODAY/IHS Global Insight Economic Outlook Index shows real GDP growth, at a six-month annualized growth rate, slowing from 4.1% in April to 3.1% in November. Increased consumer and business equipment and software spending fueled strong growth in the spring, but tight credit, high debt and continuing high unemployment will slow growth in the second half of the year.”

An excerpt from a June 25 Reuters article: “”After falling for six weeks, the uptick in the level of the Weekly Leading Index suggests some tentative stabilization, but the continuing decline in its growth rate to a 56-week low underscores the inevitability of the slowdown,” said Lakshman Achuthan, managing director of ECRI.”

““Overall, the ESI has been flat during recent months. This likely reflects the failure of a significant pickup in underlying employment trends and suggests that while the U.S. economy is no longer in recession, its recovery is subdued,” Dow Jones Newswires “Money Talks” Columnist Alen Mattich said. “The modest rise of the Dow Jones ESI in May is largely due to a reversal of April’s slight downward distortion caused by coverage of the Congressional inquiry into Goldman Sachs.” 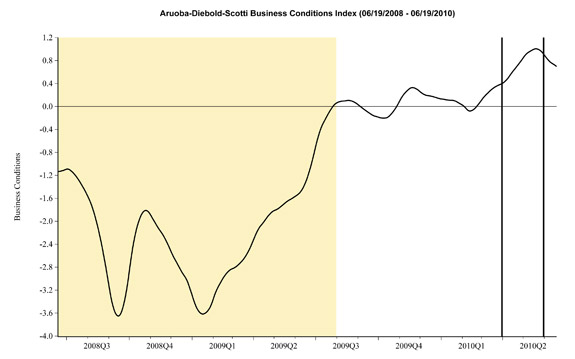 The Conference Board Leading (LEI) and Coincident (CEI) Economic Indexes, as of June 17, 2010:

““The LEI for the United States has been rising since April 2009, and though its growth rate has slowed in 2010, it is well above its most recent peak in December 2006,” says Ataman Ozyildirim, economist at The Conference Board. “Correspondingly, current economic conditions, as measured by The Conference Board Coincident Economic Index® (CEI) for the United States, have been improving steadily since November 2009, thanks to gains in payroll employment and industrial production.”

I had a post of this index on 3/10/10.  There is currently no updated value available.