On December 6, 2016, the Zillow Q4 2016 Home Price Expectations Survey results were released.  This survey is done on a quarterly basis.

“More than 90 percent of the 111 panelists who participated in this quarter’s survey expect home value growth to be slower next year, and more than 85 percent of them foresee home value appreciation rates flat or lower compared to 2016 in every year through 2021,” said Pulsenomics founder Terry Loebs.  “While those figures represent a clear consensus that home value growth will moderate in the coming years, there is no consensus concerning the pace of the expected deceleration.  For example, the most optimistic experts project that U.S. home value appreciation will average more than 4 percent annually through 2021, while the most pessimistic expect an average annual rate of just 1.1 percent for 2017 and beyond.” 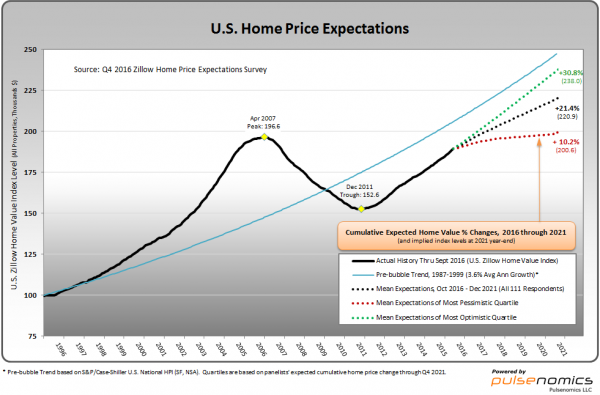 The detail of the Q4 2016 Home Price Expectations Survey (pdf) is interesting.  Of the 111 survey respondents, only two (of the displayed responses) forecasts a cumulative price decrease through 2021, and only one of those two forecasts is for a double-digit percentage decline.  That forecast is from Mark Hanson, who foresees a 24.47% cumulative price decrease through 2021.