In previous posts I have discussed the Bond Bubble and its many facets, as my analyses indicates that the overall bond market is an exceedingly large asset bubble with immensely large and wide-ranging economic implications.

Since my last post on the Bond Bubble (the June 24, 2014 post titled “The Bond Bubble – June 2014 Update“) I have written various posts about interest rates and associated dynamics.

This can be seen in the following chart of 10-Year Treasury Constant Maturity Yields: 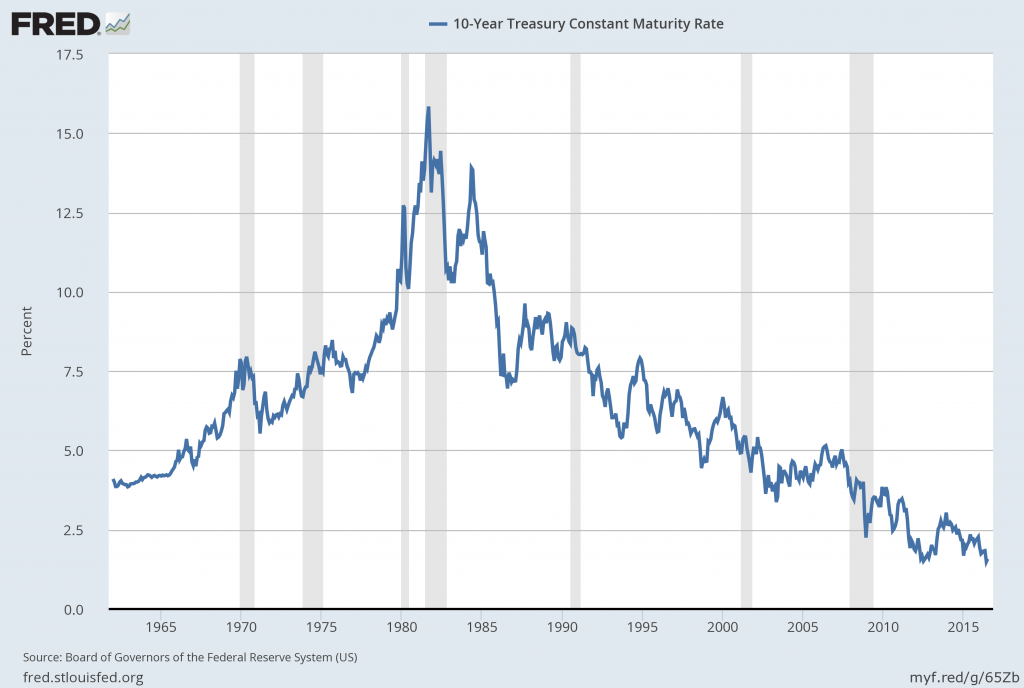 Data Source: FRED, Board Of Governors Of The Federal Reserve System; accessed July 27, 2016:

As seen in practically all economic forecasts, the belief that the ultra-low interest rate environment will continue to be sustained is widespread.

There are various highly notable aspects of the Bond Bubble that lack general awareness.  While a comprehensive discussion can’t be done in a brief manner, many of my previous posts have discussed certain aspects.

Of particular concern is the financial and economic impact resulting from the “bursting” of the Bond Bubble.  As I mentioned in my post of February 6, 2013 (“The Bond Bubble – February 2013 Update“) my expectation at that time – and what I continue to believe – is that after the bursting of the Bond Bubble the rate on the 10-Year Treasury will be far higher than it has been in recent years.  As stated in that post:

While I have not spent considerable effort trying to ascertain the level of this “natural” interest rate, I have little doubt that such a “natural” rate on the 10-Year Treasury would be at least 5%-10% and most likely considerably higher (possibly multiples thereof).  Of course, such rates would have massive implications on a number of fronts.

The prospects of such a large increase in interest rates – which, due to many dynamics of the bursting of this particular bubble – will likely happen in a short period of time.  Overall, this situation is of tremendous concern on many levels, including the impact such rising interest rates will have on other immensely large asset bubbles, including the stock market.

The perils of this bond bubble and its future “bursting” can hardly be overstated.