On May 3, 2016 Gallup released the poll results titled “U.S. Economic Confidence Down in April.”

Americans’ confidence in the economy retreated in April, with Gallup’s Economic Confidence Index averaging -14 for the month, down from -10 in March. The April average ties with September 2015 as numerically the worst since confidence started climbing toward positive territory in late 2014 and early 2015 after gas prices began to decline.

Gallup’s U.S. Economic Confidence Index is based on Americans’ ratings of current conditions and their outlook on whether the economy is getting better or worse. Since March 2015, Americans have been more upbeat about the current state of the economy than about the direction in which it is headed. In late 2014 and early 2015, as gas prices dropped, the two ratings were generally similar.

In April, 24% of Americans rated current economic conditions as “excellent” or “good,” while 30% said they were “poor,” resulting in a current conditions score of -6. At the same time, 37% said the economy was “getting better” and 58% said it was “getting worse,” for an economic outlook score of -21. The gap between the two ratings ties as the largest in the past year. 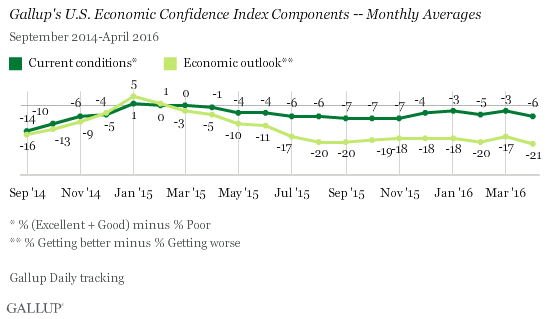 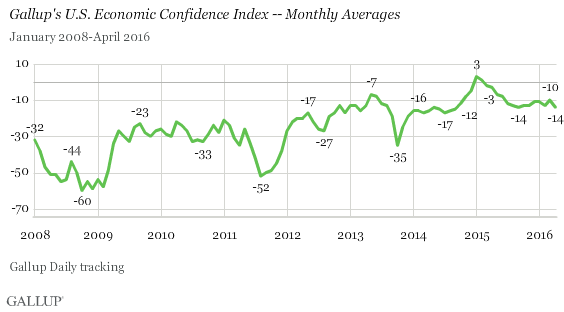