A chart of the WLI,Gr., from Doug Short’s post of February 19, 2016, titled “ECRI Weekly Leading Index: Down from Last Week“: 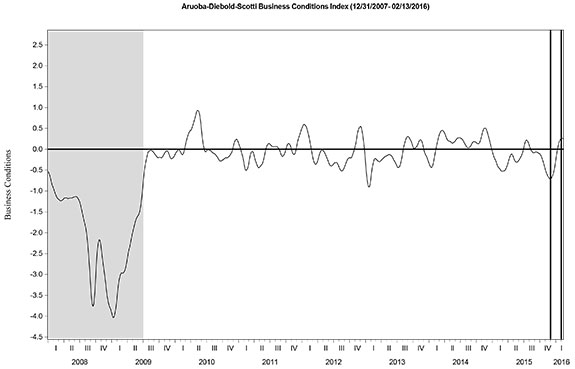 An excerpt from the February 18 release:

“The U.S. LEI fell slightly in January, driven primarily by large declines in stock prices and further weakness in initial claims for unemployment insurance,” said Ataman Ozyildirim, Director of Business Cycles and Growth Research at The Conference Board. “Despite back-to-back monthly declines, the index doesn’t signal a significant increase in the risk of recession, and its six-month growth rate remains consistent with a modest economic expansion through early 2016.”

Here is a chart of the LEI from Doug Short’s blog post of February 18 titled “Conference Board Leading Economic Index: Decrease in January for Second Consecutive Month“: