The subject of deflation contains many complex aspects, and accordingly no short discussion can even begin to be a comprehensive discussion of such.  However, in this post I would like to highlight some recent notable developments.

The issue of inflation continuing to be below the 2% target seems to be receiving more public discussion by the Federal Reserve.  In the December 16, 2015 FOMC Press Conference Fed Chair Janet Yellen said the following:

Since March, the Committee has stated that it would raise the target range for the federal funds rate when it had seen further improvement in the labor market and was reasonably confident that inflation would move back to its 2 percent objective over the medium term. In our judgment, these two criteria have now been satisfied.

There are many surveys containing inflation expectations as well as “market-based” measures of the same.  One survey is the Federal Reserve’s December 16, 2015 “Economic Projections of Federal Reserve Board Members and Federal Reserve Bank Presidents, December 2015“ (pdf); another survey can be seen in the January 2016 Wall Street Journal Economic Forecast Survey.  It should be noted that neither of these surveys shows future PCE or CPI figures below zero.

“Market-based” measures of inflation expectations include the Federal Reserve Bank of Atlanta’s series titled “Deflation Probabilities,” which has recently noticeably increased, but still remains low at 6% as of the January 20, 2016 reading.

Another “market-based” measure of inflation is the “10-Year Breakeven Inflation Rate,” described in FRED as:

The breakeven inflation rate represents a measure of expected inflation derived from 10-Year Treasury Constant Maturity Securities (http://research.stlouisfed.org/fred2/series/DGS10 ) and 10-Year Treasury Inflation-Indexed Constant Maturity Securities (http://research.stlouisfed.org/fred2/series/DFII10 ). The latest value implies what market participants expect inflation to be in the next 10 years, on average. 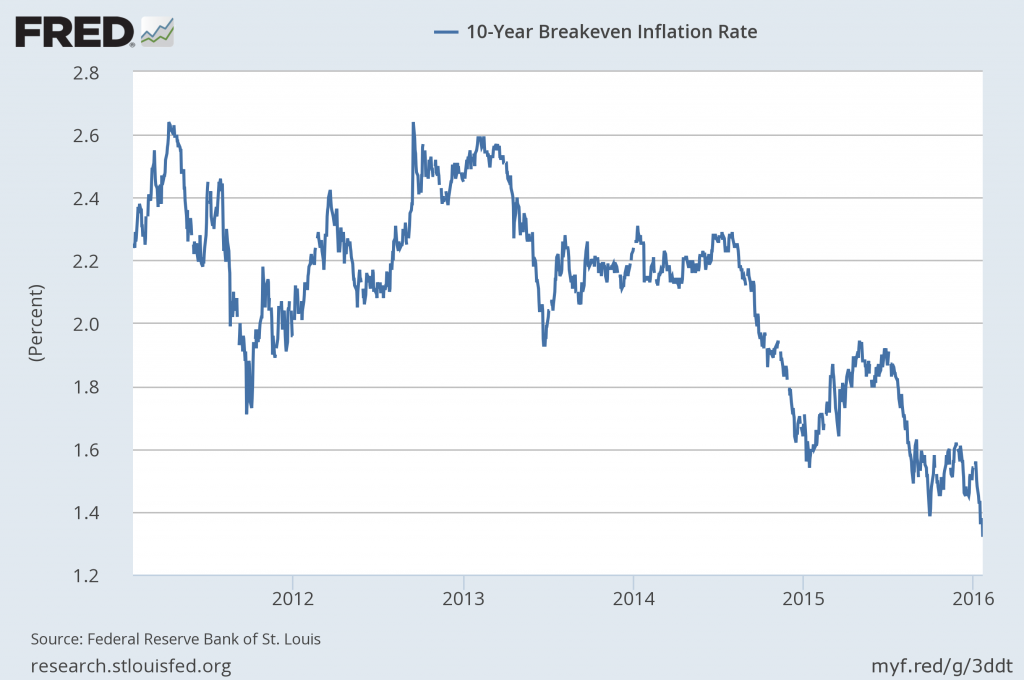 While deflation has many attributes and causes, one of its characteristics is its relative rarity since the beginning of the 20th Century.  As I mentioned in the November 14, 2013 post (“Thoughts Concerning Deflation”):

Given that deflationary episodes have been recently relatively nonexistent, “seeing” and “proving” explicit signs of such an impending condition is especially challenging.

I continue to believe that the many continuing signs of “deflationary pressures” is a foreboding.  Among these signs is the pronounced weakness in many commodities.  One such measure is the Bloomberg Commodity Index, as seen below:

(charts courtesy of StockCharts.com; chart creation and annotation by the author)

Another manifestation of deflationary pressures is seen in U.S. import and export prices.

Still another sign is economic weakness.  While there is widespread consensus that U.S. economic growth remains stable, my analyses indicates that the economy continues to have many problematical areas of weakness and the widespread consensus concerning current and future economic stability is (substantially) incorrect.

In conclusion, I continue to believe that significant (in extent and duration) U.S. deflation is on the horizon.  As discussed in the aforementioned November 14, 2013 post, deflation often accompanies financial system distress.  My analyses continue to show an exceedingly complex future financial condition in which an exceedingly large “financial system crash” will occur, during  and after which outright deflation will both accompany and exacerbate economic and financial conditions.