On December 9, 2015, the Zillow Q4 2015 Home Price Expectations Survey (pdf) results were released.  This survey is done on a quarterly basis.

Excerpts from the Press Release:

The survey responses revealed that some housing experts are concerned about over-valuation in some of the nation’s hottest housing markets – and that there is significant disagreement among experts about whether the rapid home-value growth in those markets puts consumers at risk.

The bubble fears are coming to the surface even as home values overall are expected to gradually level off over the next several years. The ZHPE panel projects an annual growth rate of 3.9 percent through the end of 2015 – a gradual slowing of the U.S. housing market. Over the next five years, among all 108 panel respondents, the expected average annual home-value appreciation rate is now just over three percent. This scenario would result in a national median home value of more than $215,000 by the end of 2020. 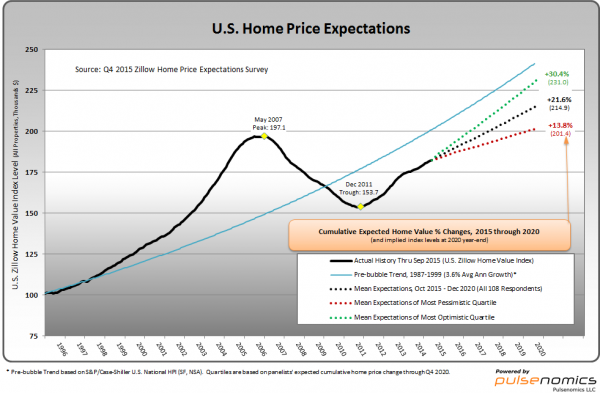