On August 13, 2015, the Zillow Q3 2015 Home Price Expectations Survey results were released.  This survey is done on a quarterly basis.

This trajectory would see the median U.S. home value rise above the April 2007, bubble-era peak of $196,400, on average, by December 2017. The most optimistic panelists predicted home values would surpass bubble-era peaks as soon as February 2017, while the most pessimistic said pre-bubble peaks would not be met or exceeded before the end of the decade (figure 1).

“The panel’s expectation for U.S. home values fell to a 3.4 percent average annual rate for the five-year forecast horizon. This is the first time in 18 months that this proxy for experts’ housing market sentiment has weakened, and it’s the lowest rate recorded in three years,” said Pulsenomics Founder Terry Loebs. “With slow wage growth persisting and monetary policy liftoff looming, home price expectations may continue to drift lower for some time.” 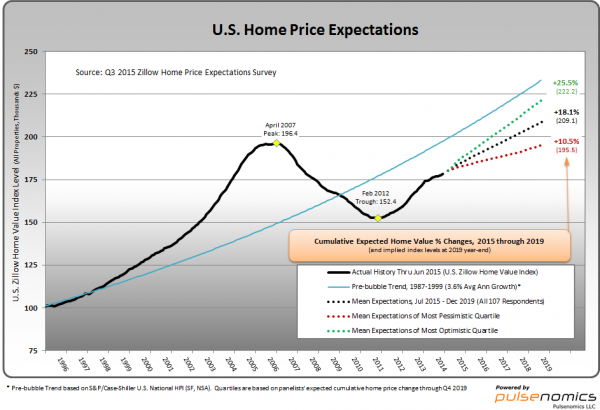