On November 11, 2014, the Zillow Q4 2014 Home Price Expectations Survey results were released.  This survey is done on a quarterly basis.

Home values will end 2014 up 4.8 percent year-over-year, and will gain another 23.5 percent in value, cumulatively, through 2019, according to results of the latest Zillow Home Price Expectations Survey.

The panelists said they expect home values to appreciate between 3 and 4 percent annually over the next five years, on average, slowing to an annual rate of 3.2 percent in 2019. Nationally, the median home value is currently $176,500, according to the 2014 Q3 Zillow Real Estate Markets Report, and is projected to cross the $200,000 threshold in September 2018. Home values are expected to rise above their 2007 peak of $196,400 in February 2018. 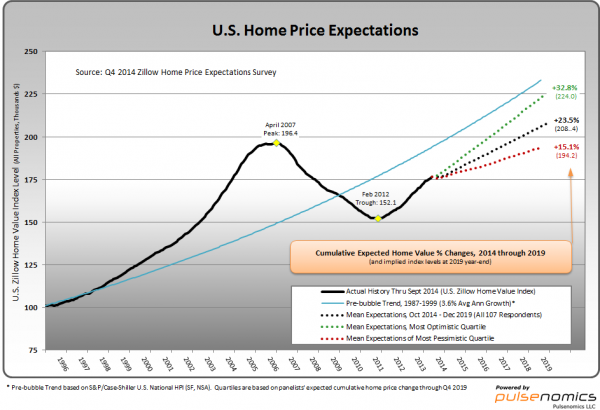