On May 1, 2014 I wrote a post titled “Retail Sales – Various Thoughts” concerning various notable changing aspects of retail sales, including aspects of rising stress in retailing.

Subsequent to that post, there have been additional noteworthy developments concerning retail sales and retail stocks.

As well, various retail stocks seem to be exhibiting notable “price action,” with many under pressure.  Among these stocks include Amazon (AMZN).  A broader selection of prominent retail stocks – as well as the Retail SPDR, XRT – appear to be flagging in price momentum.

AMZN and XRT are seen depicted on a daily basis below since 2008, compared against the S&P500, in green.  For reference purposes, I have added the 200dma to each chart: 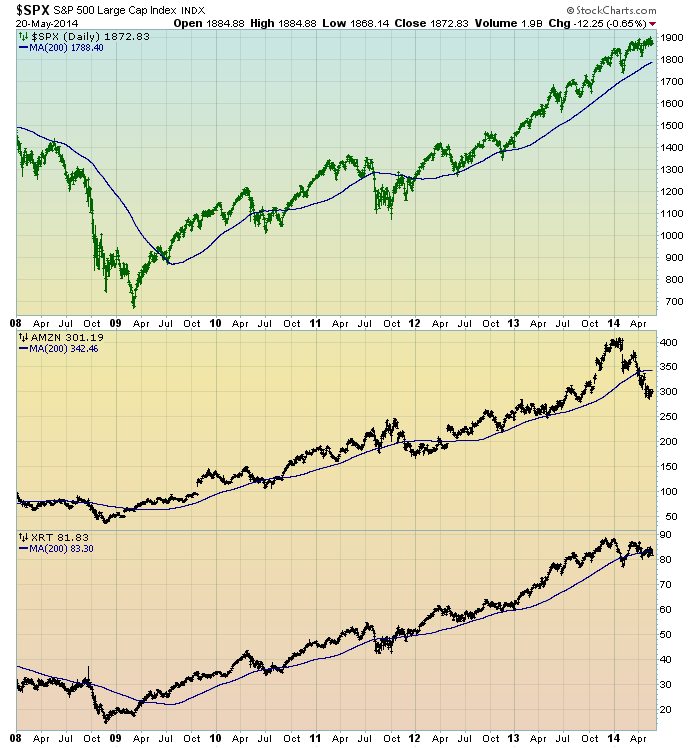 Other notable aspects in retailing include increasing price discounting, which appears to be intensifying in many segments.  I have frequently discussed these pricing issues in my profitabilityissues.com site.

While – all told – retail sales and retail stocks still (especially from a long-term perspective) generally appear to exhibit various degrees of growth, many of the changing dynamics will continue to present challenges both for retail sales as well as the broader economy in general.