One aspect is the number of people who are not working.

An excerpt from the Wall Street Journal editorial of October 23, 2013, titled “90 Million Americans Not Working” :

The U.S. now has 90.6 million “non-institutionalized” men and women over the age of 16 not working—an all-time high. That’s 10 million above the 80.5 million when President Obama took office. With total employment at 144.3 million, for every three Americans over the age of 16 earning a paycheck there are two who aren’t even looking for a job. That’s an ugly portent for American prosperity.

Demographics is about half the explanation as about six million baby boomers have turned 65 since 2008. Another is that young people are staying in school longer. Both trends are reinforced by the bearish job market. Even among those in their prime working years between 25 and 64, the number not working has increased by about 1.8 million since 2008. That is on top of the 11.3 million who are officially unemployed. 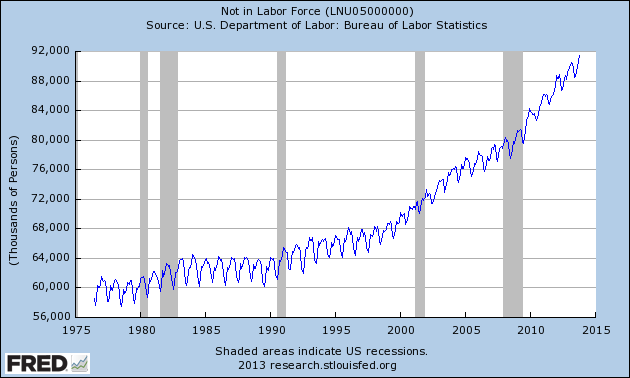