This post, in five parts, will discuss the unemployment situation in the United States.

As a prelude, I am of the strong belief that the unemployment situation – and its underlying drivers has, and will, impact the entire U.S. population, not just those unemployed.  This impact will be experienced through an adverse combination of individual-specific factors including reduced employment prospects, reduced career advancement probabilities, and reduced compensation and benefits – not to mention an array of adverse macroeconomic factors that have, and will, impact the country’s economic situation as a whole.

First, this unemployment aspect of our current economic situation is very complex.  This series of posts will present a summary discussion of the topic, as to avoid excessive complexity and length.

Fourth, a precursor to this series of blog posts is the July 2009 series of five blog posts titled “Why Aren’t Companies Hiring?”, which discusses various aspects of the topic, many of which lack recognition.

Part 2:  What Is The Actual Unemployment Rate?

Some believe that the U-6 rate, currently at 14.5%, is a (closer) proxy of the actual unemployment rate.

Here is the accompanying chart, indicating the U-3, U-6 and his “SGS Alternate Unemployment Rate.”  One sees that there is a different trajectory for the SGS Alternate rate, currently at 22.2%,  vs. the official U-3 and U-6 rates:

I like to use these three unemployment rates – the U3, U6, and SGS Alternate Unemployment Rate –  as benchmarks;  they also  serve to (disconcertingly) illustrate how one concept, that of the unemployment rate, can have three vastly different values.

As to my belief of the actual unemployment rate, I think that the answer is conditional on many different factors, including – most importantly – how one chooses to define an “unemployed person.”  As well, I don’t believe that the framework and methodologies currently used to calculate the official unemployment rate are optimal.

Given my misgivings with the framework and methodologies currently utilized, I find it nebulous as to what exactly the actual unemployment rate may be.  However, from an “all things considered” standpoint, taking into account my definition of an “unemployed person”, the official unemployment statistics, an array of arguments supporting and refuting the validity of the official unemployment statistics, empirical data, etc.,  I surmise that the “actual” unemployment rate may well be above 20%, as suggested by the SGS Alternate Unemployment Rate.  Of course, if this is actually the case, it would be highly worrisome on a variety of fronts, and have vast implications.

While the official unemployment rate (U-3) has been recently declining, there are various aspects of the officially-stated unemployment situation which are highly worrisome.  I have been featuring monthly posts (“3 Critical Employment Charts“) illustrating three such facets: the median duration of unemployment, the number of unemployed 27 weeks and over, and the pace of the current jobs recovery vs. that of previous post-war recessionary periods.  My interpretation of these charts is that they indicate that “this time is different” – and not in a good way.

As well, there is the issue of the labor force participation rate.  This issue has received a considerable amount of attention lately, as declines in this rate help to lower the calculated unemployment rate in a seemingly paradoxical manner.   As one can see at the Federal Reserve Bank of Atlanta’s Jobs Calculator, this one factor alone has a considerable impact on the stated unemployment rate.

For reference, here is a chart of the labor force participation rate, from the St. Louis Federal Reserve (FRED) site, last updated on April 6, 2012.  The current level is 63.8%: 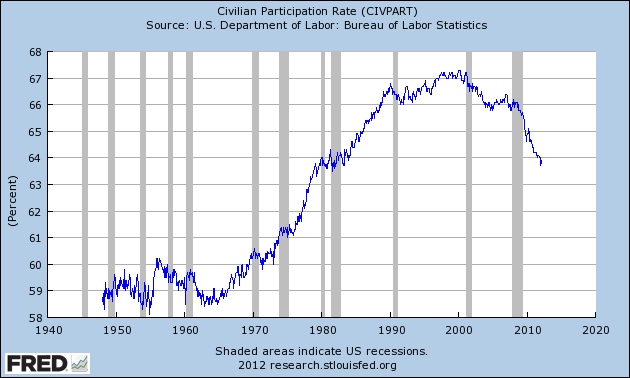 Of particular note is the significant decline in this rate since roughly the year 2000.

Of great concern is the trend of the future unemployment situation.

Various unemployment rate forecasts among economists as well as other professional forecasters indicate a consensus belief of a continual slow decline in the official unemployment rate.  For instance, the April Wall Street Journal Economic Forecast Survey indicates an average unemployment rate forecast of 7.9% by December 2012 and 7.4% by December 2013.  Of course, this is contingent on their belief of continual slow, but steady, economic growth (as seen in the GDP forecasts) for the next few years, with average forecasted GDP growth of 2.5% in 2012 and 2.6% in 2013.

However, my analysis indicates that there are many other adverse trends and dynamics that largely lack recognition.  My aforementioned “Why Aren’t Companies Hiring?” series discusses some of these issues.

Another issue that I find disconcerting is that the U.S. has experienced very high levels of corporate profitability since 2009, yet the unemployment situation purportedly has only slowly improved.   Can strong growth in employment be expected going forward, given a variety of dynamics, one of which is a current likely peaking of profit margins?  While some may argue that employment is a “lagging” indicator it appears to me that the “lag” has been too long – i.e. the “window” in which substantial hiring would normally occur has likely passed.

Another driver of hiring, or lack thereof, appears to be corporate revenue growth.  Recently, although profitability has been strong, corporate revenue growth has lagged.  This is significant on many fronts;  as it pertains to hiring, it is relevant in that many companies are hesitant to hire without seeing stronger revenue growth.  While a recent Deloitte CFO survey indicates that CFOs plan to hire, it also confirms that CFOs expect growth in revenue will continue to lag.

On numerous occasions I have commented that our national unemployment problem is severe, and unfortunately there do not appear to be any “easy” solutions.

While I would like to believe that the actual unemployment situation will diminish considerably – and I understand why many – including economists and other professional forecasters – believe it will, my analysis indicates that there are a variety of impediments standing in the way of such substantial improvement.  The two primary impediments are:

Economic growth – I believe that the consensus expectations (substantially) overestimate the level – and consistency – of economic activity over the next few years – which will have an adverse macroeconomic impact on the unemployment rate.   Such economic weakness would negatively impact the employment situation.

Factors inherent in the employment situation – Even if the consensus among economists of continual slow, but steady, economic growth does occur over the next few years, there appears to be many seriously problematical factors now inherent in the employment picture that preclude a robust – or even consistently solid – hiring scenario from occurring.

In closing, while I would like to be optimistic with regard to the future employment situation in the United States, absent a substantial change in the underlying dynamics encompassing the situation, I continue to view this unemployment situation as highly worrisome.