Again, the difficulty with valuing stocks on the basis of raw price/earnings ratios is that corporate profits as a share of GDP are presently over 70% above their long-term historical norm. Though the actual course of corporate profits will be affected by numerous factors, including the extent to which extraordinary fiscal deficits normalize, we would expect corporate profits over the coming 3-4 year period to contract at a rate of somewhere between 5-15% annually. The practice of valuing stocks on the basis of current earnings or Wall Street’s projections of “forward operating earnings” (which embed assumptions of even more extreme profit margins) has never in history been more reckless and misleading.

Following these comments is this chart: 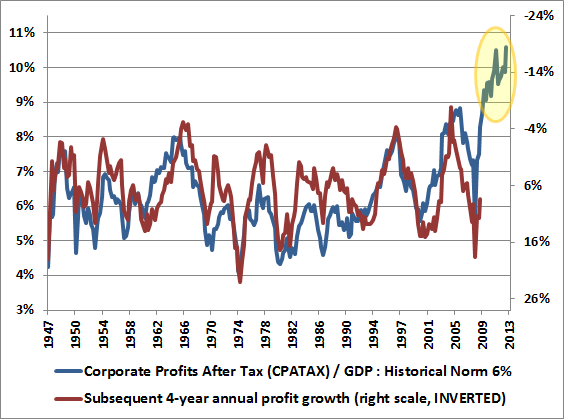 The sustainability of today’s levels of corporate and business profitability is currently a key issue, especially given various profitability metrics – including the S&P500′s operating margins, net profit margins, operating profits, EPS,  as well as after-tax corporate profits as a percentage of GDP and aggregate after-tax corporate profits – are not only at or near record-high levels, but also in most cases far above historically “normal” levels.

While the vast majority of forecasts from both investment analysts as well as corporate executives indicate continued growth in profitability, my analyses indicate that corporate profits will fall substantially from these levels, with far-reaching implications for many parties.

While I find many of Hussman’s writings to be interesting – and I generally agree (albeit for some reasons that differ) with many of  John Hussman’s statements regarding the vulnerability of corporate earnings to decline – one aspect of his statement highlighted above I do not agree with.  That has to do with the pace and duration of the projected future earnings decline.

While he says “…we would expect corporate profits over the coming 3-4 year period to contract at a rate of somewhere between 5-15% annually,” my analyses indicate that the earnings decline will be steeper and faster than the 5-15% annual rate which he states. There are many reasons for my belief in the steepness of such an earnings decline; some of which I discussed in the post of July 25, 2013 titled “Headwinds Facing Future Corporate Earnings.”

I also believe that the coming economic environment will not only see a rapid decline in earnings, but also an environment in which there is no (aggregate) profitability – i.e. substantial aggregate losses will occur as well as deep declines in aggregate revenues.  Such an environment will happen after the “…substantial ‘upheaval’ via a future ‘crash‘” that I recently mentioned in the September 18, 2013 post titled “Has The Financial System Strengthened Since The Financial Crisis?” as well as the October 8 post titled “Building Financial Danger – October 8, 2013 Update.”