The stock market appears to be at an important juncture.

As seen in the below chart, by Ron Walker (thechartpatterntrader.com) there is the much-discussed potential Head and Shoulders formation that looms large: 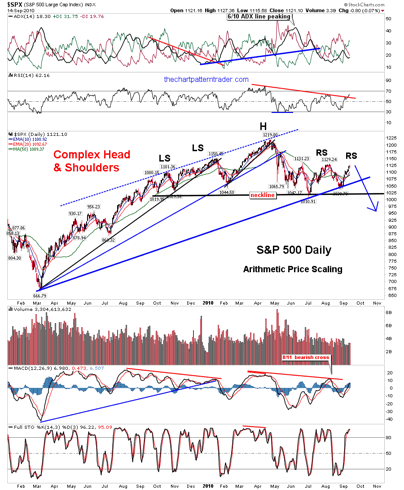 As well, the VIX is just above 20.  As I have commented upon previously, over the last 10 years the 20 level on the VIX has been one of great importance:

(click on chart to enlarge) (chart courtesy of StockCharts.com)

While both of these conditions, as well as an obviously weakening economy, may seem to foreshadow a stock market that is vulnerable to decline, I maintain my stance written of in a June 2 post:

“While I have written extensively about how I believe the stock market will face an exceedingly large decline in the future, for now I think (based upon a variety of factors) that a near-term stock market advance is likely. This is not to say that I think “all is well” with the economy or the markets – anything but. In essence, I think we will see a little more “sunshine” but if one looks out to the (economic/financial) horizon “the sky is black,” unfortunately.”

Even though a rally from here may well prove strong, one should not become complacent.  As I also mentioned in that June 2 article:

“I believe that we are building to a variety of major market events.”