(This is my second blog post that solely discusses pricing issues.  My first was on April 23, 2010)

Firms in general have enjoyed the economic “tailwind” of rising sales for decades.  While this can be seen in a variety of measures, one of particular note is that of Retail Sales.  As seen in the following chart (from the CalculatedRisk blog of 8-13-10) Retail Sales have proven robust and (relatively) resilient, with latter-2008 being the brief major exception: 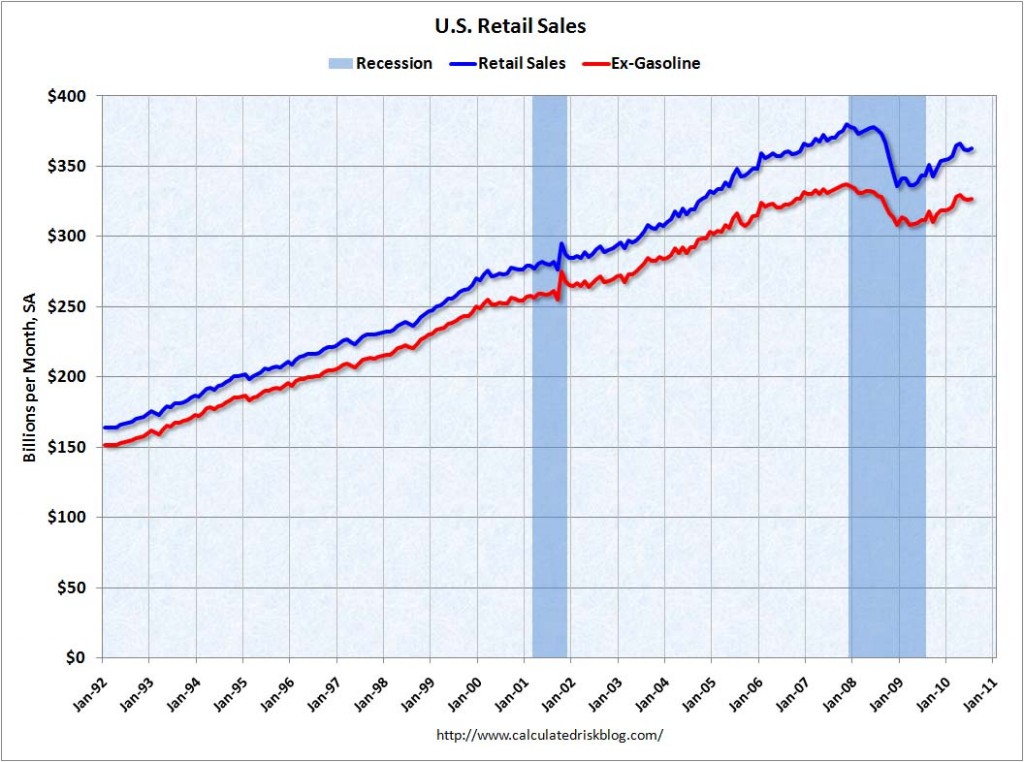 Despite this “tailwind”, problems appear to be increasing especially in the area of pricing.  An August 19 Wall Street Journal article discussed pricing issues at P&G.  One part of the article was particularly noteworthy, discussing P&G’s strategy of offering premium products:

“But the long recession and creaking recovery have undermined that strategy. Consumers might be willing to shell out for iPads, but their day-to-day spending reflects an entrenched frugality that often means leaving P&G’s relatively expensive products on the shelf. Nearly two-thirds of U.S. consumers said they switched to a cheaper substitute for at least one basic household product, food or beverage in the past year, according to a Sanford Bernstein survey of 834 consumers. More than three-quarters said they believe less expensive products were as good as or better than those they replaced.

In response to the changing U.S. market, the company is doing the once unthinkable—slashing prices…”

P&G’s situation does not seem unique, given the existence of widespread discounting and promotions despite resilient overall retail sales figures.  Given this dynamic, one question that arises is whether we are now starting to experience a (downward) revaluation in product differentiation?  In essence, is product differentiation generally losing its ability to attract sales at higher prices?  If so, the implications are immense, especially for those firms that are “Premium Pricers.”

This issue is but one of many complex pricing issues now facing companies.  While it is of course difficult to generalize across all firms due to their various characteristics, the following five issues appear to be of primary significance:

First, how will those companies whose focus is offering premium products (and services) fare should the economy materially weaken (as I expect) from here?

Second, if one assumes that product differentiation is generally losing value (i.e. its ability to generate revenues at sufficiently higher prices), can “Premium Pricers” successfully adapt?  How might this be done?

Third, are products and services now considered “staples” (i.e. necessary in nature) changing to more “discretionary” in nature?  How will this impact firms?

Fourth, how will cost structures change should significant economic weakness reassert itself?

Fifth, are Pricing actions now being taken to attract sales (including discounting and promotions) undermining firms’ future pricing power?  In other words, to what extent will current pricing actions undermine the future success of firms?

In the July 9 post, I wrote “I believe that many firms will continue to face very challenging conditions…”  This belief is based upon a number of factors.  However, firms’ ability to successfully manage Pricing given the overall increasing complexity is a key reason for this belief.   On an “all things considered basis”  many firms do not appear to be successfully adapting to this new Pricing complexity.  This will prove especially problematical in a significantly weaker economic environment.