There are, however, quite a few indicators that, from a historical perspective, seem to disconfirm Gold’s current price, which as I write this is $1101 for the December futures contract.

One of the factors that seems to be speaking against Gold is the lagging performance of the HUI Index.  As I wrote in the June 16 blog post:

“One measure that I follow is the ratio of HUI (an index of gold stocks) to that of the physical metal itself.  One theory, perhaps the predominant one, is that the gold stocks should move, or at least verify, the price movements of the physical gold itself.   Looking at the weekly chart (seen below) over the last 10 years seems to indicate that although gold has been relatively buoyant over the last year, the gold stocks, as seen by the HUI Index, have lagged since early 2008.  One interpretation of this is that the gold stocks are not confirming the move in gold, meaning that gold may soon head down…”

Although Gold has continued to head up, as one can see in the chart below, the HUI:Gold ratio continues to lag and is at subdued (relative to the last ten years’) levels: 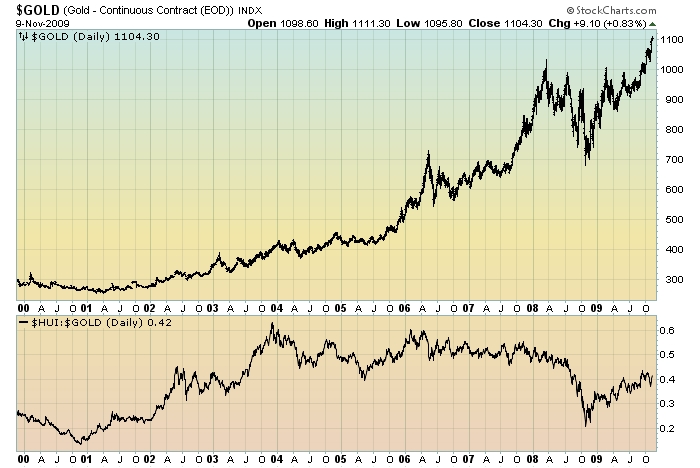 I find the lagging performance of the Gold stocks, as seen by the HUI Index, to be very conspicuous.  This is especially so given the current investment environment where investors have shown they are even willing to aggressively bid up prices for securities that possess the most dubious of fundamental value.

In my opinion, predicting Gold’s price has always been difficult.  There are a variety of reasons for this, including the fact that the markets for both physical Gold and Gold stocks are relatively small.  It doesn’t take large investment inflows, or outflows, to move the price significantly.

Of course, Gold can be viewed as the ultimate “safe haven” security.  Placing a value on this “safe haven” aspect is very difficult.  Could Gold’s current price be reflecting a significant “safe haven” premium?  In effect, could the current strong performance of Gold somehow be a precursor of (more) economic problems?  The answer to both of these questions can certainly be “yes.”  However, if so, it would be odd to have Gold rising strongly at the same time low quality paper assets have been rising strongly as well.  From a long-term historical perspective, usually Gold’s “safe haven” qualities are most highly valued when “paper” assets are suffering.

1 thought on “A Few Comments About Gold”