While many U.S. economic indicators – including GDP – are indicating economic growth, others depict (or imply) various degrees of weak growth or economic contraction.  As seen in the April 2018 Wall Street Journal Economic Forecast Survey the consensus among various economists is for 2.8% GDP growth in 2018.  However,  there are other broad-based economic indicators that seem to imply a weaker growth rate.  There has been a significant lowering of estimates for 1st Quarter GDP growth as seen in the Federal Reserve Bank of Atlanta’s GDP Now (April 16, 2018 estimate of 1.9%) releases.

“Rail Freight Carloads” continues to show a downward progression.  Shown below is a chart with data through January (last value of 1,104,080, updated March 21, 2018): 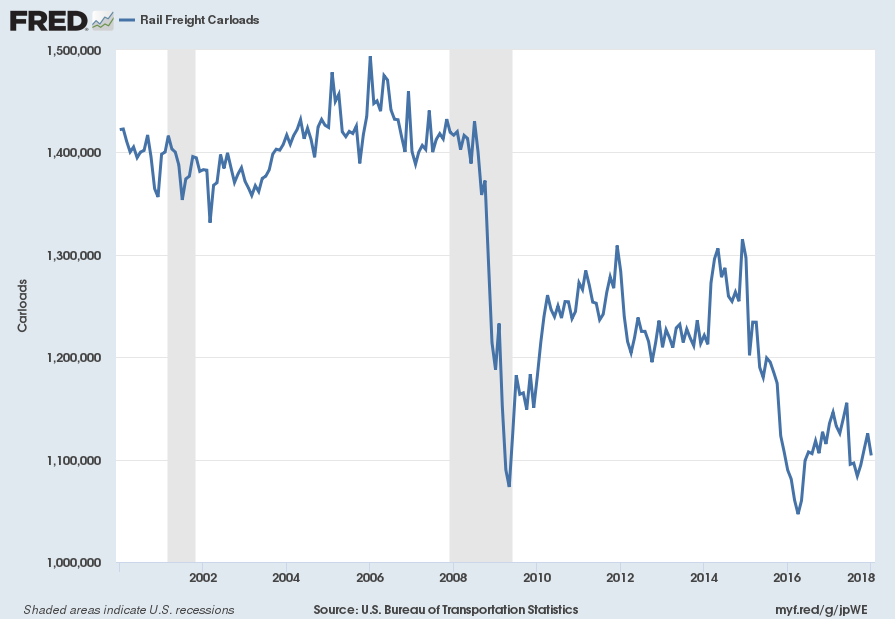 Here is the same measure on a “Percent Change From Year Ago” basis, with value -2.8%: 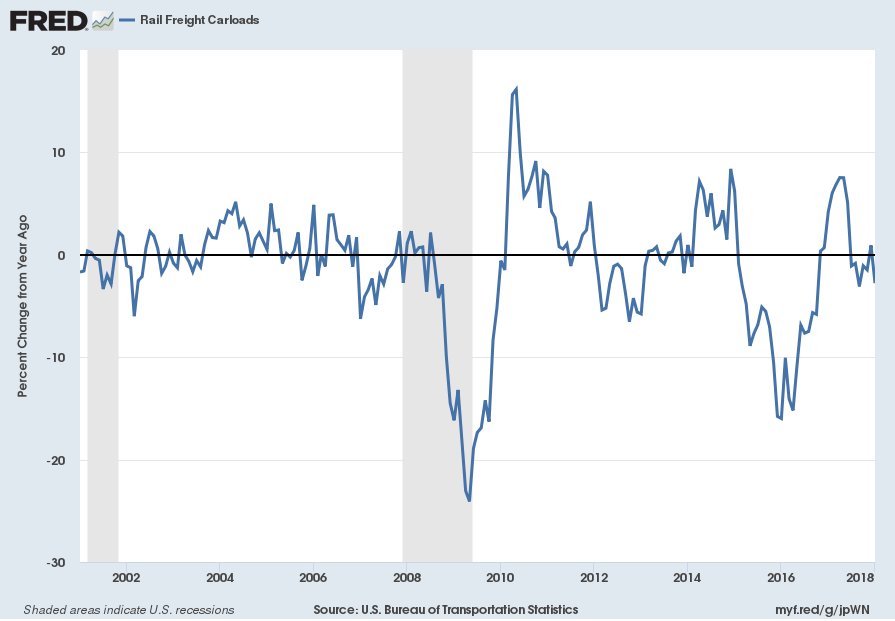 Auto sales have experienced significant growth over the post-2009 period. The current reading (through February, updated on March 29) is 16.962 million vehicles: 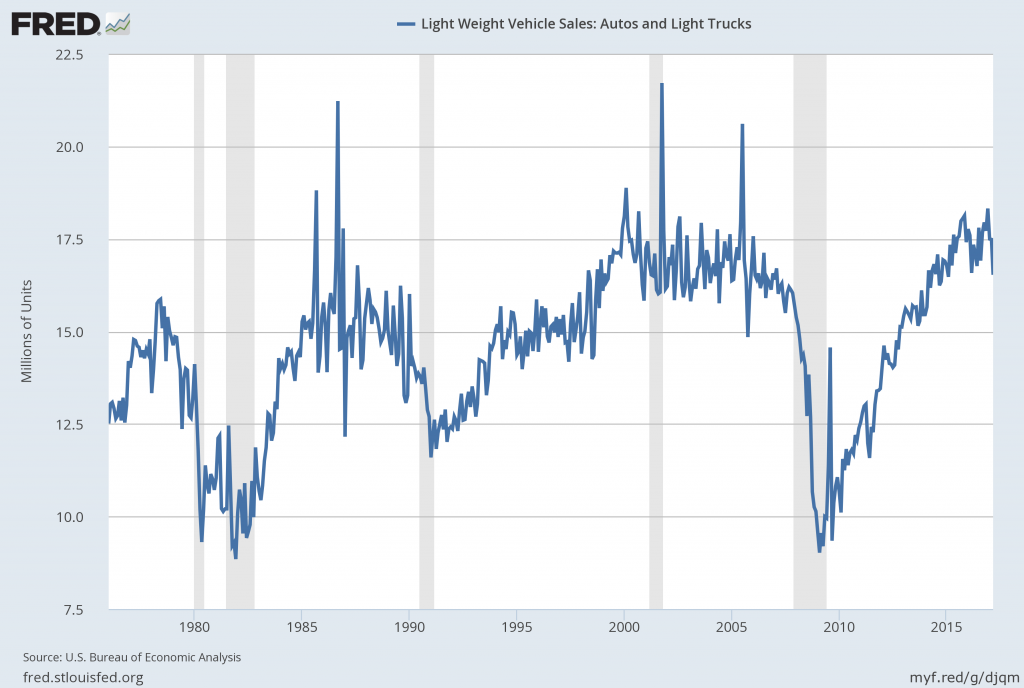 Here is the same measure on a “Percent Change From Year Ago” basis, with value -2.1%: 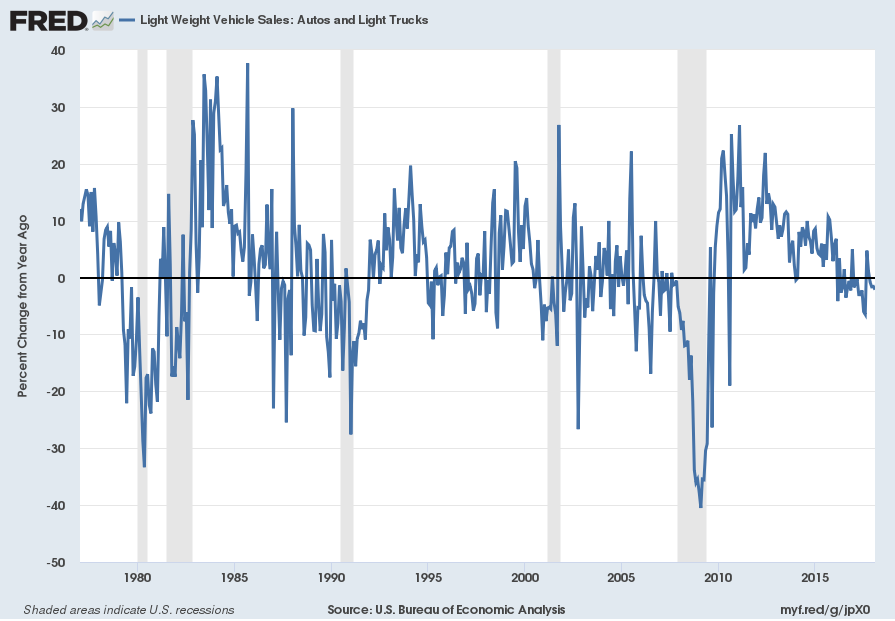 I believe that many factors indicate that auto sales have peaked.  While this peaking will have vast economic implications, there are many other factors concerning auto sales that are worrisome.  While an exhaustive discussion of the topic would be exceedingly lengthy, various notable factors include the degree to which (ultra-) cheap financing and relaxed financing terms are aiding sales, as well as various aspects of pricing and discounting. 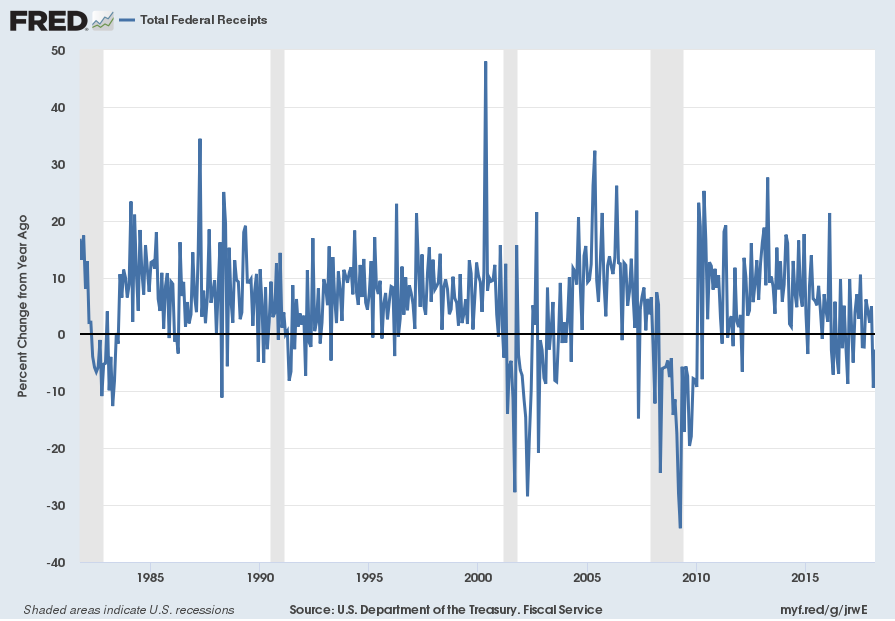 “Commercial And Industrial Loans, All Commercial Banks”  through March had a last value of $2138.4559 Billion.  The growth in such loans continues to decline.  Shown below is the measure displayed on a “Percent Change From Year Ago” basis with value 2.6%, last updated April 13, 2018: 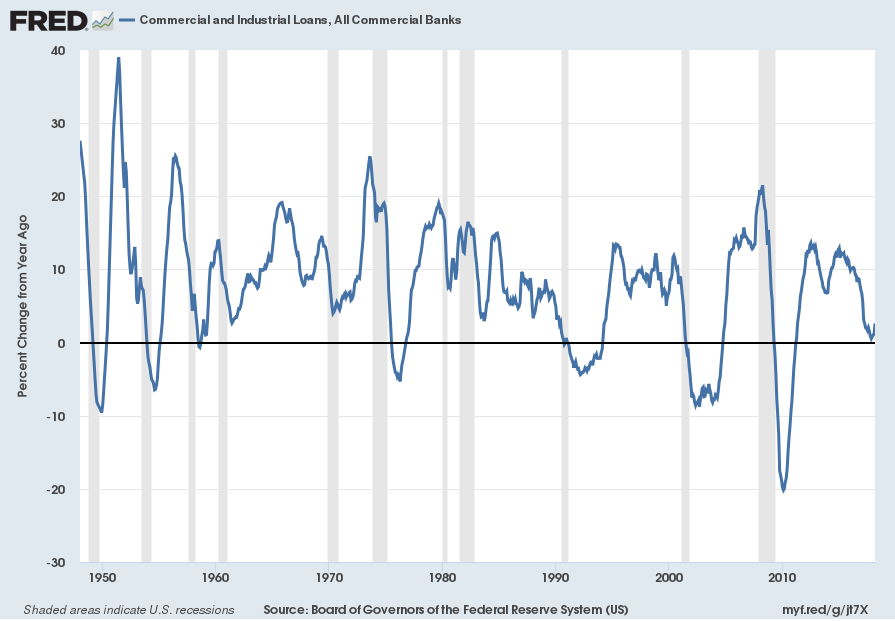 Although there has been widespread recent concern about impending inflation, as well as indications of higher inflation in some price measures, I continue to believe that deflation (as defined by when the CPI goes below zero) will occur.

Current inflation levels and the possibility of deflation is a vastly complex topic, and as such isn’t suitably discussed in a brief manner.  I have discussed the issue of deflation extensively as it will have critical and wide-ranging economic implications.  As I have stated in past commentaries, my analyses indicate that surveys or “market-based” measures concerning deflation will not provide adequate “advance warning” of this deflation.

For reference, here is the “Core PCE” measure as of the March 29, 2018 update, showing data through February, with a current reading on a “Percent Change From Year Ago” basis of 1.6%: