On July 5, 2017 Gallup released the poll results titled “Americans’ Confidence In Economy Remains at Low for the Year.”

Americans’ confidence in the economy remained at a 2017 low in June, with Gallup’s U.S. Economic Confidence Index averaging +3 for the second month in a row. Despite confidence lagging below January’s monthly record high of +11, June nonetheless marked the eighth consecutive month in which U.S. adults rated the economy positively.

Last week, Americans’ confidence in the economy averaged a score of 0, the first time in the 33 full weeks since the presidential election that the index’s weekly average was not positive. However, this may be more of a fluke than a harbinger — lower scores in the middle of the week dragged down the weekly average. They returned to previous levels by the end of the week.

Last month, Americans continued to view current economic conditions positively, with 33% describing the economy as “excellent” or “good” compared with 23% describing it as “poor.” This leaves the current conditions component at +10 for June, identical to its performance in May.

For the third month in a row, however, a slightly larger share of Americans (49%) said the economy is “getting worse” than said it is “getting better” (45%). This puts the economic outlook component at -4 in June, in line with its May reading. 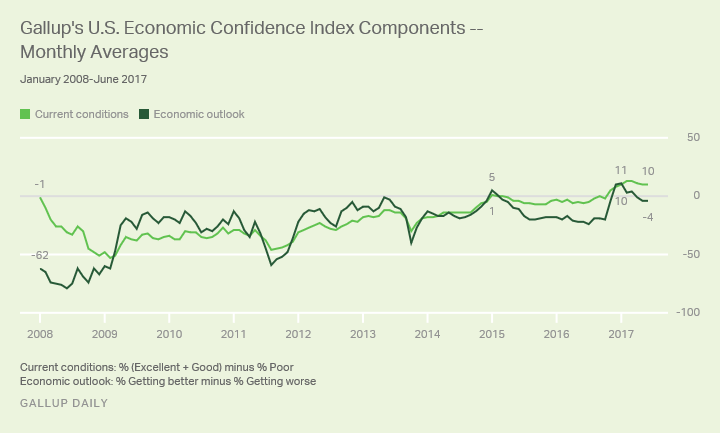 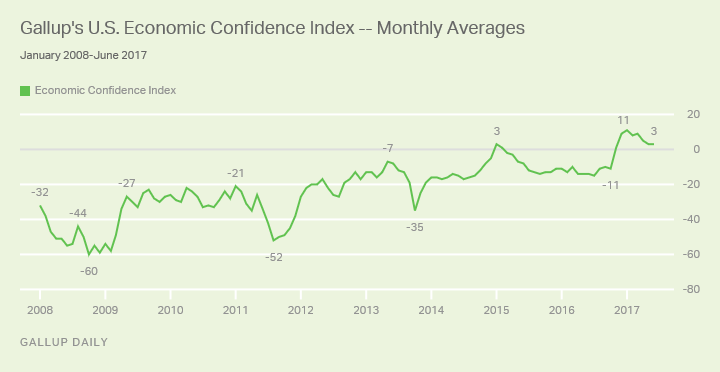