The Index of Small Business Optimism was unchanged in May at 104.5.

“The remarkable surge in optimism that began last year right after the election shows no signs of slowing down” said NFIB President and CEO Juanita Duggan. “Small business owners are highly encouraged by the President’s regulatory reform agenda, and they remain optimistic there will be tax reform and health-care reform. This is a policy-driven phenomenon.”

The Index for May matched its strong performance in April of 104.5. That means the Index has been at a historically high level for six straight months. Five of the Index components posted a gain, four declined, and one remained unchanged.

A strong majority of owners, 59 percent, reported hiring or trying to hire in May, although 51 percent said they found few or no qualified workers. Remarkably, that was a problem for 86 percent of owners who said they tried to hire. Nineteen percent of all owners in the survey said finding qualified workers was their top concern, making it the second-biggest problem for small business.

“The tight labor market has been a persistent problem for small business owners for the past several months, and the problem appears to be getting worse,” said NFIB Chief Economist Bill Dunkelberg. “It’s forcing small business owners to increase compensation, which we’re seeing in this data, to attract new workers and keep the ones they have. But it also means a lot of small business owners are short-handed. They can’t keep up with customer demand because the labor pool isn’t producing enough qualified workers. It’s a significant structural problem in the economy that policymakers will have to watch.”

Twenty-eight percent reported plans to make capital outlays, a one-point gain from April but well below historical levels for periods of growth.

Only 3 percent of owners reported that all their borrowing needs were not satisfied, unchanged and historically very low. Thirty-one percent reported all credit needs met (down 1 point), and 51 percent explicitly said they did not want a loan. Only 1 percent reported that financing was their top business problem compared to 22 percent citing taxes, 19 percent citing the availability of qualified labor, and 13 percent regulations and red tape. Twenty-eight percent of all owners reported borrowing on a regular basis (down 3 points). The average rate paid on short maturity loans was up 50 basis points to 5.9 percent. 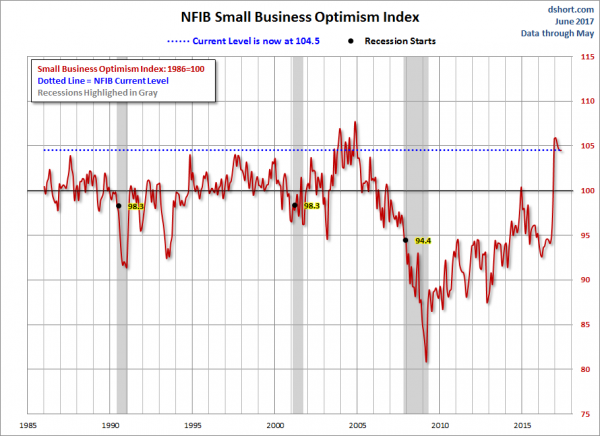 Further details regarding small business conditions can be seen in the full May 2017 NFIB Small Business Economic Trends (pdf) report.