Throughout this site there are many charts of economic indicators.  At this time, the readings of these various indicators are especially notable.  While many are still indicating economic growth, others depict (or imply) various degrees of economic weakness.

While there are many indicators that gauge – and/or predict – economic activity, among the most prominent (although far less universally discussed than GDP) is the Chicago Fed National Activity Index (CFNAI).  Here is the measure displayed as a 3-month moving average (CFNAI-MA3), last updated on September 22, 2016: 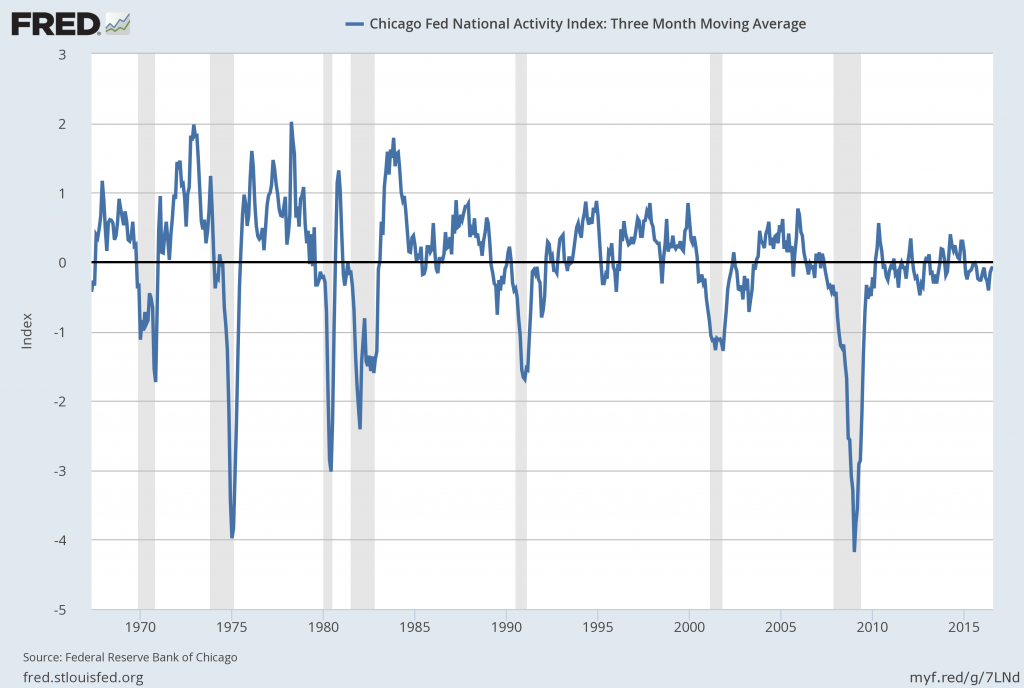 What I find especially notable about the post-June 2009 readings (i.e. the current post-recession period) is how the CFNAI-MA3 has spent a considerable amount of time below zero.  As well, the readings above zero have been relatively muted.  Both of these facets contrast previous periods of economic expansion, as seen between the vertical gray areas that depict officially-designated recessions.

Many indications of weakness in manufacturing have been featured on this site.  One area that continues to indicate problematical conditions is the seemingly (very) high levels of inventory, as seen in various measures, such as Total Business:  Inventories to Sales Ratio, last updated October 14, 2016: 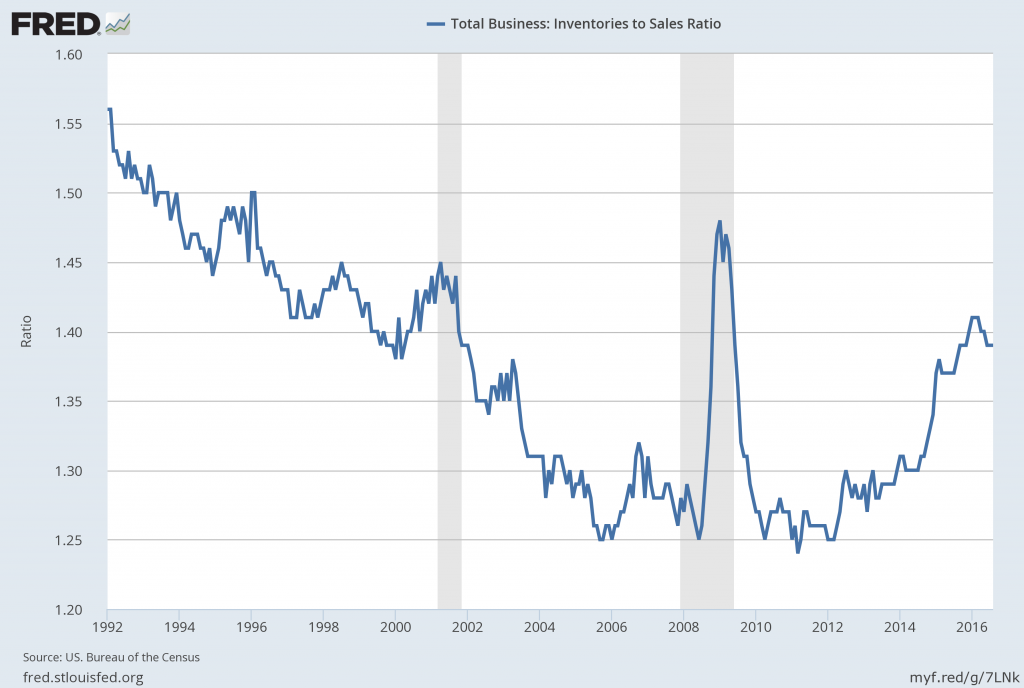 It should be interesting to monitor this trend going forward.  Of course, the most “painless” way to resolve high levels of inventory is to have a strong upswing in sales.  Is that what businesses as a whole are predicting, or are there other factors at play?  Another perspective – albeit non-conventional in nature, is this same ISRATIO measure shown on a “Percent Change From Year Ago” measure, as seen below: 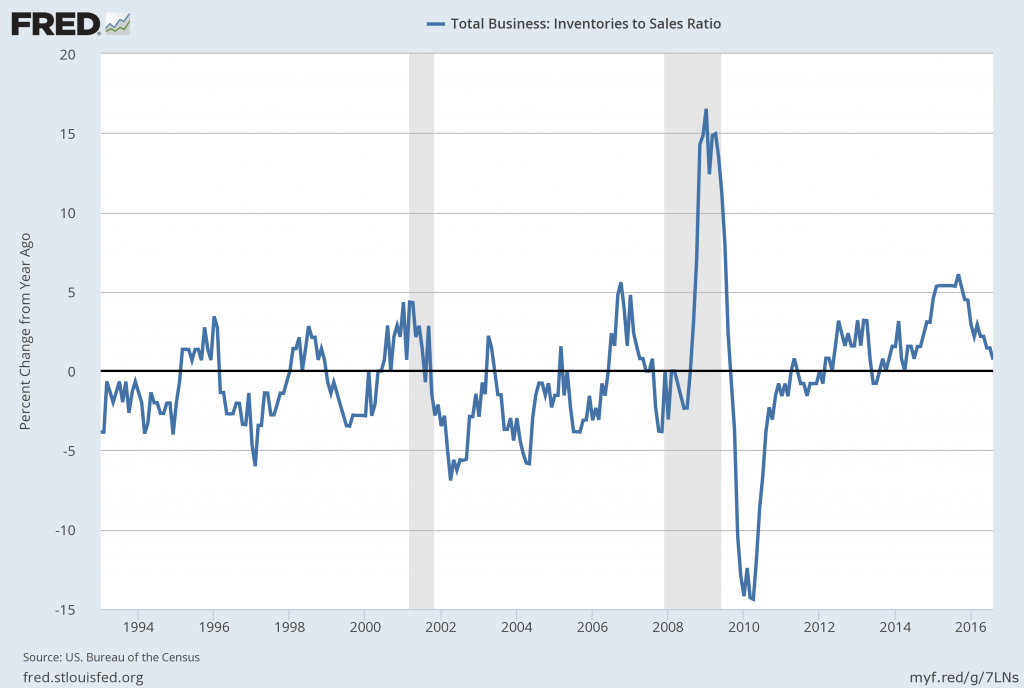 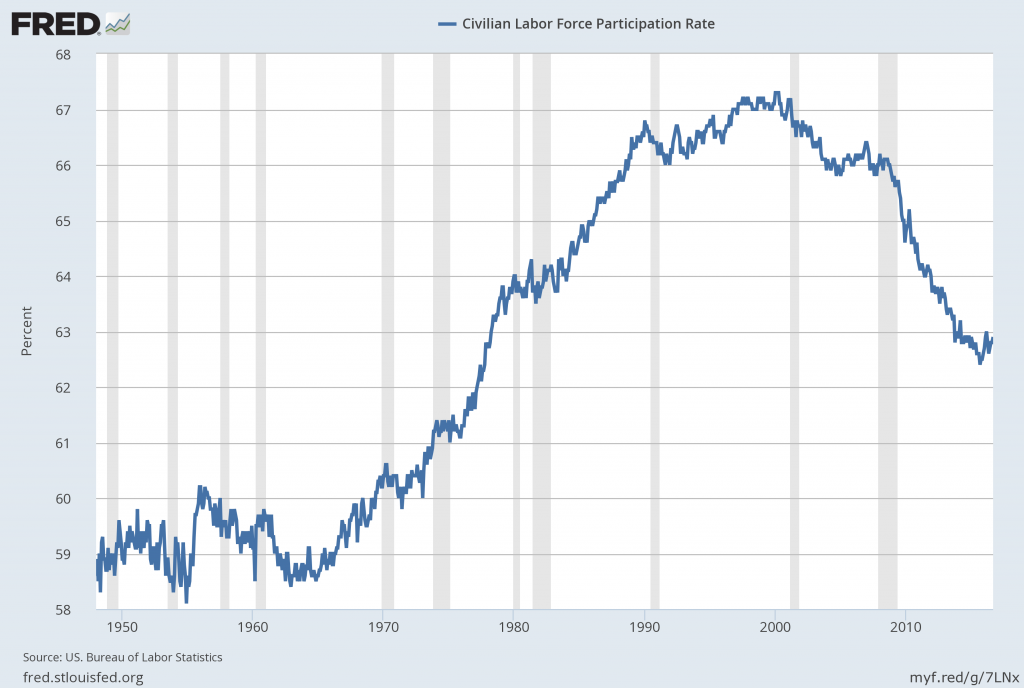 My analyses indicate that the underlying dynamics of the unemployment situation, including that of the Labor Force Participation Rate shown above, remain exceedingly worrisome, especially with regard to the future.  These dynamics are numerous and complex, and greatly lack recognition and understanding, especially as how, from an “all-things-considered” standpoint they will progress in an economic and societal manner.

While I don’t believe that the Federal Reserve’s Labor Market Conditions Index (LMCI) is an accurate portrayal of the overall employment situation, it is notable in that, as opposed to the Unemployment Rate and Total Nonfarm Payrolls statistics, it appears to be indicating weakness. The LMCI is described as being “derived from a dynamic factor model that extracts the primary common variation from 19, seasonally-adjusted, labor market indicators.”  A reference document is seen in the May 22, 2014 document titled “Assessing the Change in Labor Market Conditions.”

Well, let me just say the Labor Market Conditions Index is a kind of experimental research product that’s a summary measure of many different indicators and essentially that measure tries to assess the change in the labor market conditions. As I look at it and as that index looks at things, the state of the labor market is still healthy, but there’s been something of a loss of momentum. 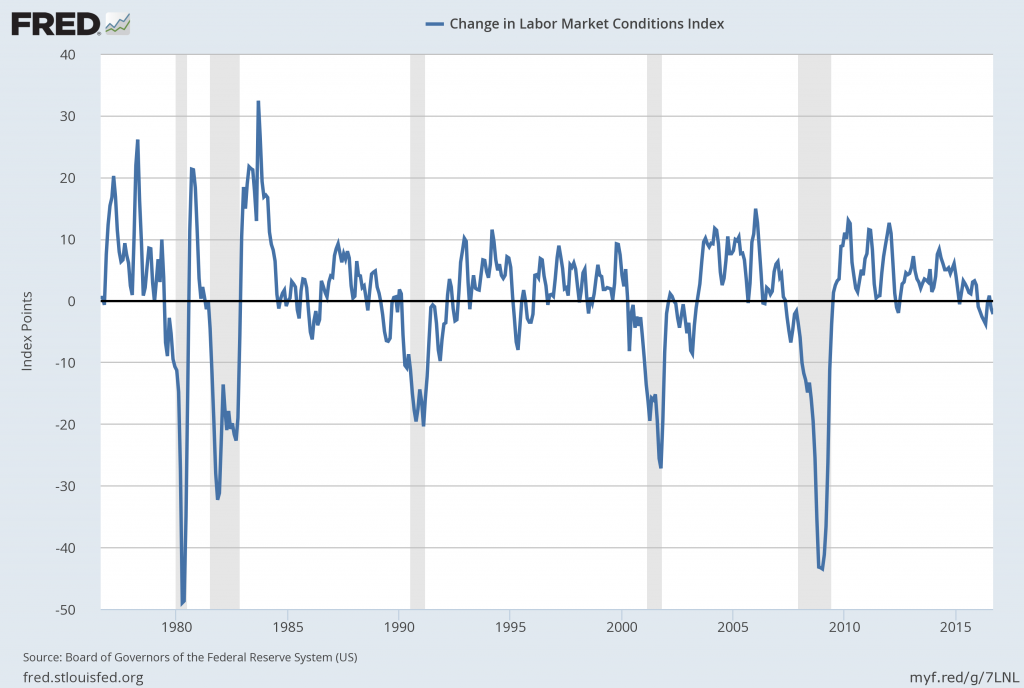 Another interesting facet concerning employment levels is that of the relationship between capacity utilization and the unemployment rate.  (note: This is discussed in “On The Economy” (Federal Reserve Bank of St. Louis) in an October 13, 2016 post titled “Employment, Capacity Utilization and Business Cycles“) 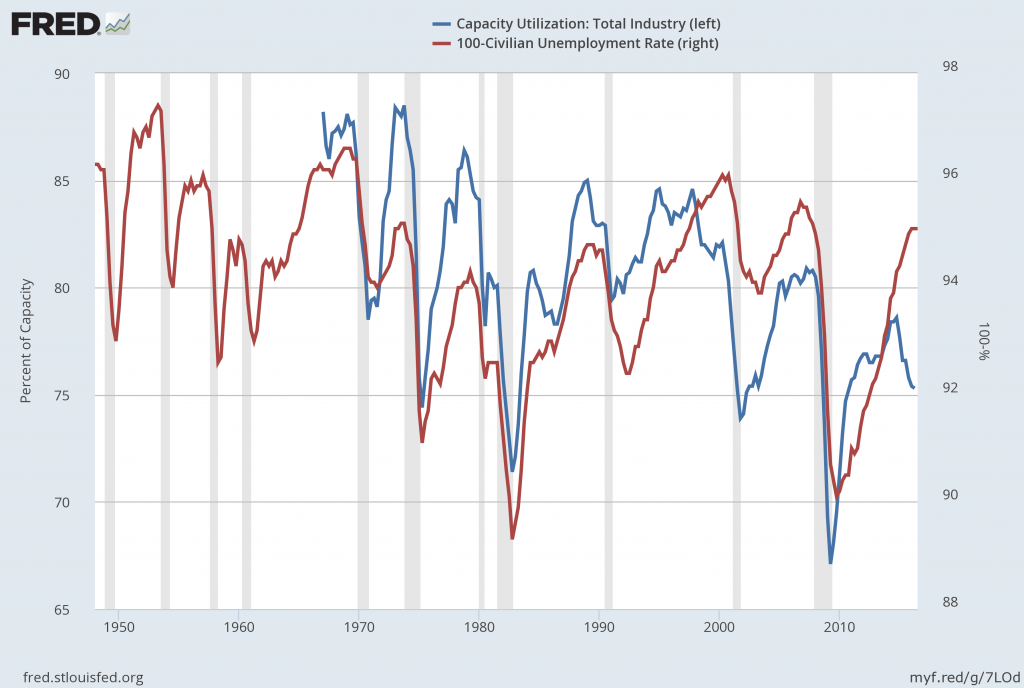 While there are undoubtedly many factors that influence this relationship, I find the recent divergence between the two measures to be notable.  Another notable aspect is the low (on an absolute basis from a long-term historical perspective) and declining level of Capacity Utilization.