After scoring +3 in January, the first positive reading in seven years, Gallup’s Economic Confidence Index edged down to +1 in February. The reading last month is still the second-highest monthly average since Gallup began tracking confidence on a daily basis in 2008.

In Gallup Daily tracking throughout February, an average 27% of Americans said the economy was “excellent” or “good,” while 27% said it was “poor.” The resulting “0” current conditions score compares with +1 in January. Meanwhile, the economic outlook score decreased by three points to +2, based on 49% of Americans saying the economy is “getting better” and 47% “getting worse.” 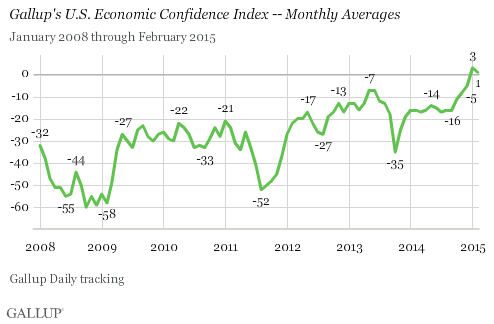