On November 4, 2014 Gallup released the poll results titled “U.S. Economic Confidence Index in Highest in Over a Year.”

Gallup’s U.S. Economic Confidence Index jumped to a monthly reading of -12 in October. This is the most positive score since the -12 of July 2013, though it is still lower than the record high of -7 in May 2013. The three-point increase from September is the largest monthly improvement seen this year so far.

Gallup’s Economic Confidence Index is the average of two components: how Americans view current economic conditions, and their perceptions of whether the economy is getting better or worse. In October, 22% said the economy is “excellent” or “good,” while 32% said it is poor. This resulted in a current conditions dimension score of -10, the highest current conditions score since February 2008.

Meanwhile, 41% of Americans said the economy is getting better, while 54% said it is getting worse. This resulted in an economic outlook score of -13 — the best outlook score since January. 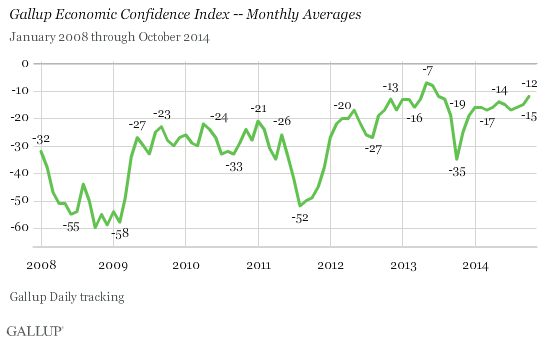