On October 7, 2014 Gallup released the poll results titled “U.S. Economic Confidence Index Stable at -15 in September.”  The subtitle is “Confidence slightly higher in most recent week.”

Gallup’s U.S. Economic Confidence Index was steady in September, at -15 for the month, similar to the -16 it averaged in August. September’s reading is also consistent with monthly scores throughout 2014, which have ranged from -14 to -17.

Gallup’s Economic Confidence Index is the average of two components: how Americans view current economic conditions, and their perceptions of whether the economy is getting better or worse. In September, 20% said the economy is “excellent” or “good,” while 34% said it is poor. This resulted in a current conditions dimension score of -14, the same current conditions score found for the past six months. 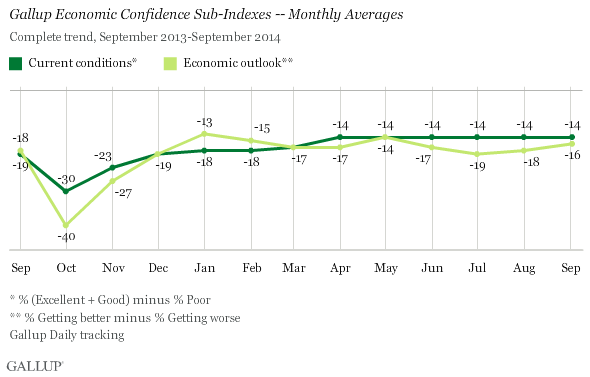