In the post of September 11, 2014 (“Additional Thoughts Concerning The Economic Situation“) I stated:

There are an array of indications and other “warning signs” – many readily apparent – that the current level of economic activity and financial market performance is accompanied by exceedingly perilous dynamics.

Many of these disparate indicators – of various levels of importance – do serve as readily apparent warnings.  While these warnings do not, at least yet, signal the immense level of danger in the economic and financial system – which I have previously stated dwarfs that preceding and during the Great Depression – they do serve to indicate various problem areas and pernicious dynamics.

Among commodities’ price movements that I find especially notable is the price of silver, which has fallen from roughly $50 in early 2011 to a current price of $17.67, and weakness in iron ore prices, as discussed in the Bloomberg September 24 iron ore article as well as the September 5 Wall Street Journal article concerning iron ore .

Regardless of current true levels of unemployment, the main focus should be on future employment and the quality of such, which is exceedingly worrisome given the overall economic dynamics.

Another indicator that I find notable is that seen in the ratio of two measures from the Conference Board. As seen below, as depicted in Haver’s post of September 19 (“U.S. Leading Economic Indicators Index Continues to Improve“) the ratio of the Coincident Composite Index to the Lagging Composite Index has been sinking for a while now, and is not far from the level seen in 2009: 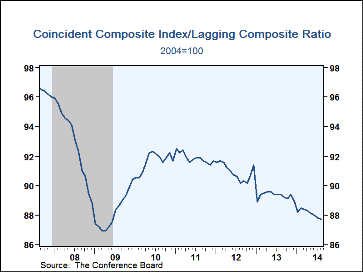 While some prefer that “evidence” of forthcoming (severe) economic weakness be plainly evident and predicted in a widely available indicator or model, such has not been the case in prior economic recessions and depressions in post-1900 America, and certainly was not the case in 2008.  My analyses indicate that, in part due to the complexity of today’s (global) economic and financial system, almost all will again suffer from such lack of warning.

As I stated in the aforementioned “Additional Thoughts Concerning The Economic Situation” post:

Cumulatively, the growing level of financial danger will lead to the next crash. Key attributes of this next crash is its outsized magnitude (when viewed from an ultra-long term historical perspective) and the resulting economic impact.  This next financial crash is of tremendous concern, as my analyses indicate it will lead to a Super Depression – i.e. an economy characterized by deeply embedded, highly complex, and difficult-to-solve problems.