Perhaps the main reason that I write of our economic situation is that I continue to believe, based upon various analyses, that our economic situation is in many ways misunderstood.  While no one likes to contemplate a future rife with economic adversity, current and future economic problems must be properly recognized and rectified if high-quality, sustainable long-term economic vitality is to be realized.

Current perceived levels of financial danger – both seen in various economic indicators and consensus forecasts, as well as widespread economic commentary – portray (very) low readings for both the near- and longer-terms.  Adding to this widely-perceived level of comfort is the (seemingly) continually-ascending stock market.

While these measures certainly appear to project an aura of safety and continuity, so also did many aspects of past economic periods prior to financial crashes and wide-ranging economic weakness.

What all of these past U.S. economic periods had in common was that, despite subsequent declines of various degrees, economic activity and financial markets at some point rebounded and ascended to new highs.

Unfortunately, my analyses continue to indicate the latter assessment.  There are an array of indications and other “warning signs” – many readily apparent – that the current level of economic activity and financial market performance is accompanied by exceedingly perilous dynamics.

I have written extensively about this peril, including in the following:

“Thoughts Concerning The Next Financial Crisis”

“Was A Depression Successfully Avoided?”

“The Next Crash And Its Significance”

“A Special Note On Our Economic Situation”

Cumulatively, the growing level of financial danger will lead to the next crash. Key attributes of this next crash is its outsized magnitude (when viewed from an ultra-long term historical perspective) and the resulting economic impact.  This next financial crash is of tremendous concern, as my analyses indicate it will lead to a Super Depression – i.e. an economy characterized by deeply embedded, highly complex, and difficult-to-solve problems.

One of the main attributes of our current economic situation is its inordinate complexity.  As such, assuming that future economic outcomes will resemble those of the past is inadvisable.

For long-term reference purposes, here is a chart of the Dow Jones Industrial Average since 1900, depicted on a monthly basis using a LOG scale (updated through September 5, 2014, with a last value of 17137.36):

(click on chart to enlarge image)(chart courtesy of StockCharts.com) 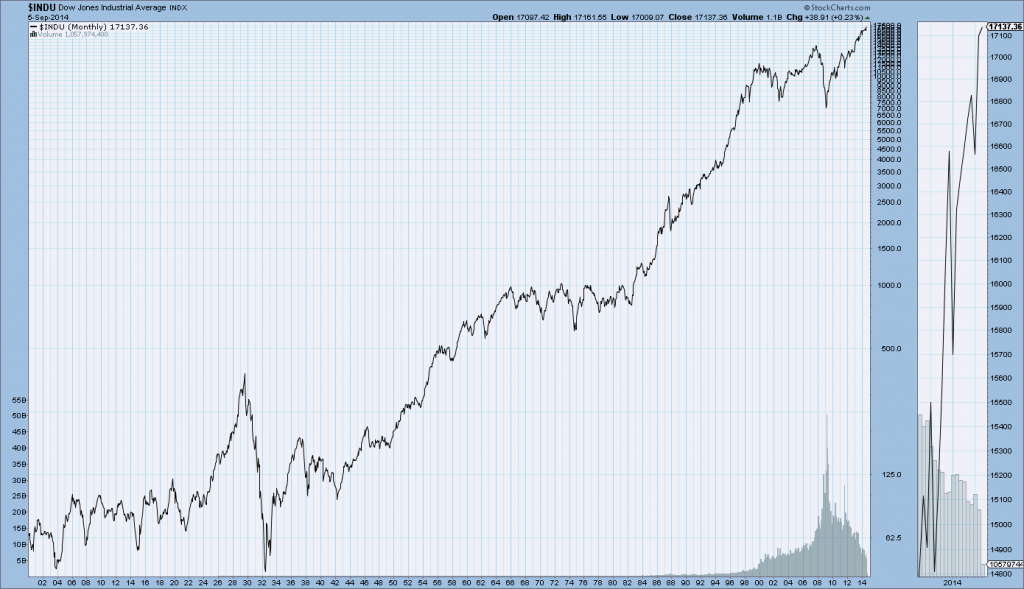