On June 3, 2014 Gallup released the poll results titled “U.S. Economic Confidence Ticks Up to -14 in May.”  The subtitle is “May saw the highest weekly confidence reading since January.”

Gallup’s U.S. Economic Confidence Index increased to -14 in May, its highest monthly reading in 2014 so far. May’s economic confidence reading, however, remains significantly below the -7 average found in May 2013, which was the highest monthly average since Gallup began tracking the measure in 2008.

Gallup’s Economic Confidence Index is an average of two components: Americans’ views of the current economic situation and their perceptions of whether the economy is getting better or worse. In last month’s average, views of the current economic situation remained the same as in April, with 20% rating the economy as “excellent” or “good,” while 34% say it is “poor,” resulting in a current conditions score of -14. Meanwhile, Americans’ views about the direction of the economy improved with 40% saying the economy is “getting better,” and 54% saying it is “getting worse.” This results in an economic outlook score of -14, up from April’s score of -17. 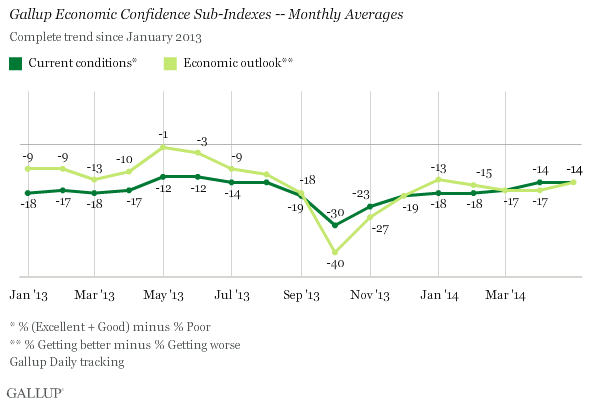