Gallup’s Economic Confidence Index improved to -19 in December from -25 in November, and is now much higher than the -35 found in October amid the federal government shutdown. While the December index matches September’s score, it remains below the improved monthly readings that prevailed from October 2012 through August 2013.

Americans’ assessments of current U.S. economic conditions and their perceptions of whether the economy is getting better or worse — the two components that make up Gallup’s Economic Confidence Index — improved in December.

The net economic outlook score grew to -19 from -27 in November, and now sits just below the -18 measured in September. The December score reflects 38% of Americans saying the economy is getting better and 57% saying it is getting worse. Americans’ views on the economy’s direction peaked at -1 in May 2013. 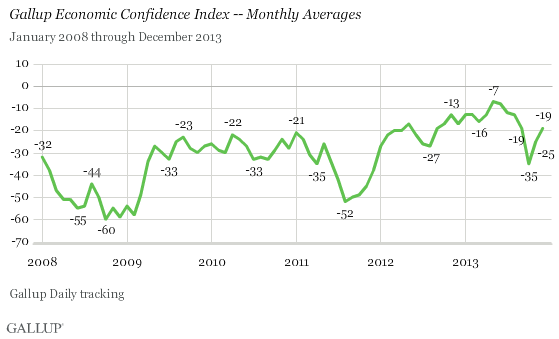