On November 5, Gallup released the poll results titled “U.S. Economic Confidence Plunges in October.”  The subtitle is “Sixteen-point drop to -35 is sharpest in any month since Gallup Daily tracking began.”

Americans’ confidence in the U.S. economy sank for the month of October amid the partial U.S. government shutdown and partisan bickering over the federal debt limit. For the entire month, Gallup’s Economic Confidence Index was down 16 points, the sharpest monthly drop since Gallup began tracking economic confidence daily in 2008. Confidence improved after leaders in Washington reached a deal to end the shutdown, but it has not yet recovered to pre-shutdown levels.

Gallup’s Economic Confidence Index is based on two components: Americans’ assessments of current economic conditions in the United States and their perceptions of whether the economy is getting better or worse. Both components soured last month during the shutdown, but Americans’ economic outlook declined more than twice as much as their views of the current economic situation.

In October, 68% of Americans said the economy is getting worse — the highest such percentage in nearly two years — while 28% said it is getting better. This results in a net economic outlook score of -40, down 22 points from September.

By contrast, October’s -29 net current conditions score — based on 15% of Americans saying the economy is in excellent or good shape, and 44% saying it is poor — is down 10 points from the prior month.

The result is that Americans’ views of the economic future are worse than their views of the present for the first time since November 2011. 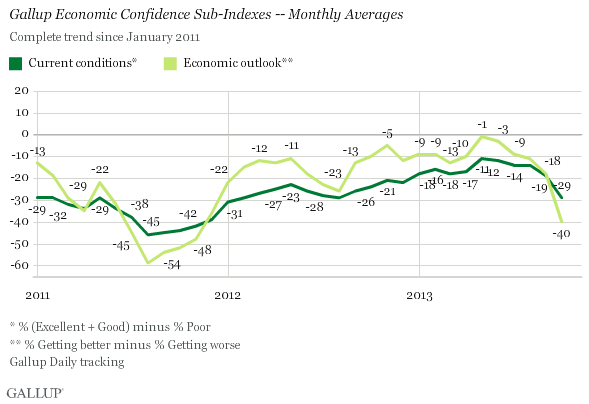