On October 1, Gallup released the poll results titled “U.S. Economic Confidence Dips During Budget Battle.”  The subtitle is “Index falls to -19 in September from -13 in August.”

As the fiscal battles in Washington intensified last month and the federal government inched closer to its first shutdown in 17 years, Americans’ confidence in the economy deteriorated. Gallup’s Economic Confidence Index slid to -19 in September from -13 in August, the worst monthly average since -19 in September 2012.

Gallup’s Economic Confidence Index is based on two components: Americans’ assessments of current economic conditions in the United States and their perceptions of whether the economy is getting better or worse. Americans’ net economic outlook score fell to -18 last month from -11 in August, while their net current conditions score slipped to -19 in September from -14. Consumers’ economic outlook grew particularly pessimistic in the latter half of the month as the likelihood of a government shutdown increased. 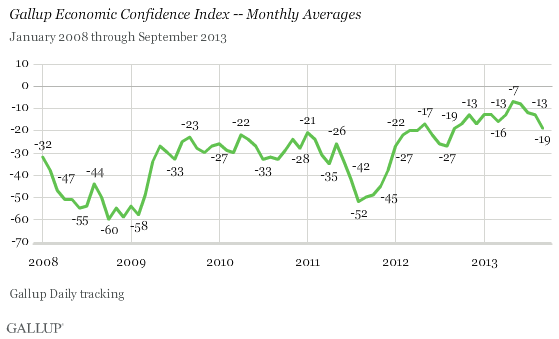