Americans remained more negative than positive last month about economic conditions in the U.S. The Gallup Economic Confidence Index averaged -13 in August, similar to the -12 in July. The current score is down from -7 in May, which was the highest monthly reading since Gallup began tracking economic confidence daily in 2008.

Gallup’s Economic Confidence Index is based on two components: Americans’ assessments of current economic conditions in the United States and their perceptions of whether the economy is getting better or worse. Americans’ net current conditions score was unchanged last month, at -14, and their net economic outlook score of -11 was down slightly from -9 in July.

The six-point decline in the overall index during the past four months is almost entirely due to the deterioration of Americans’ economic outlook, rather than their evaluation of current economic conditions. Americans’ outlook rating has fallen 10 points since May, while the current conditions rating has slipped three points. 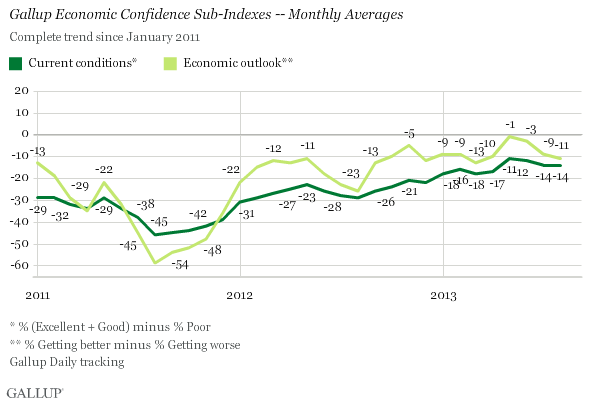