On August 6, Gallup released the poll results titled “Americans’ Confidence in the Economy Worsens in July.”  The subtitle is “Gallup’s Economic Confidence Index registers -12, down from -8 in June.”

Americans’ confidence in the economy in July was the lowest it has been in any month since April. Gallup’s Economic Confidence Index slipped to -12 last month, down from -8 in June and -7 in May — with the May reading representing the most positive monthly average since Gallup began tracking economic confidence daily in 2008. Still, consumers’ confidence remains higher than the -16 reading in March — the lowest monthly score this year — which encompassed the public’s reaction to the automatic budget cuts that took effect as part of sequestration.

Gallup’s Economic Confidence Index is based on two components: Americans’ assessments of current economic conditions in the United States and their perceptions of whether the economy is getting better or worse. Most of the decline last month comes from a worsening economic outlook, although both index components dropped. 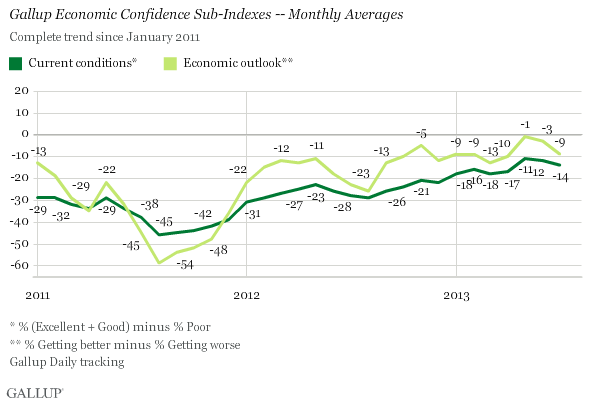