The price of Gold is particularly important at this juncture, for a number of reasons.

I have recently written of the decline in Gold’s price and its significance with regard to “deflationary pressures,” most recently in the June 10 post titled “The Prospect Of Deflation” as well as the May 20 post (seen on Doug Short’s blog) titled “The Recent Decline In Gold.”

A daily price chart of Gold for the last 10 years (through June 14) is seen below.  Gold’s price is depicted in the middle plot of the chart, with the S&P500’s price seen above it (in green) and the Gold:HUI ratio on the bottom plot: 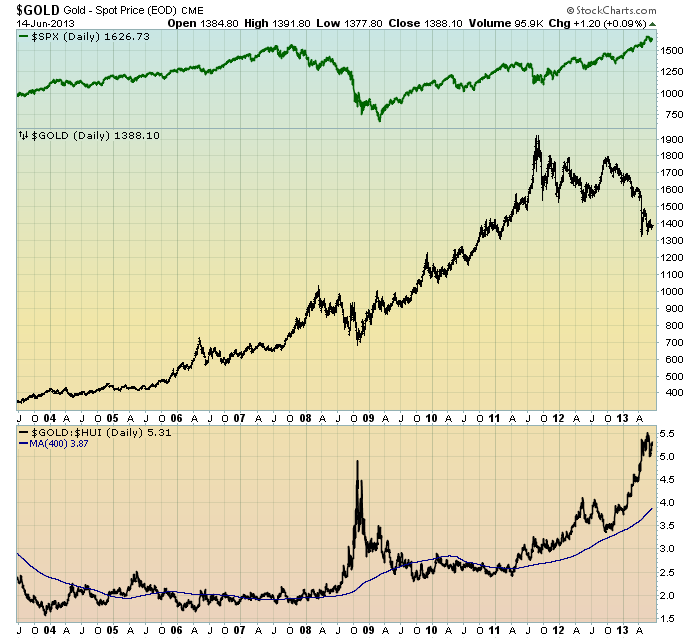 I believe that a few items are especially notable with regard to the above chart.  As one can see, the recent Gold “price action” appears to be in a downward consolidation, and appears particularly poor in light of the strong upward price movements of the S&P500.  From a variety of “technical analysis” perspectives, it appears that Gold’s price is vulnerable to further decline, likely substantial.

Further supporting the idea that Gold is vulnerable to a significant decline is the price of the HUI Index, if one assumes that Gold stocks augur the future price of Gold.  As one can see in the bottom Gold:HUI plot, the 400-day moving average (the thin blue line) of the Gold:HUI ratio has been increasing since roughly mid-2011.  I think that it is important to note that during Gold’s advance from 2005 through mid-2011, this 400-day moving average (dma) largely stayed in a range of roughly 2-2.5.  Now, as one can see, the ratio is at 3.87.  If Gold were to decline back to the 2.5 level of the Gold:HUI 400dma, Gold would be at $651/oz, based upon a current HUI price of 260.55.  (The 2.0 level of the 400dma would equate to a Gold price of $521.)  While these Gold prices of $651 and $521 are simply rough projections, they do speak to not only a potential downside in Gold’s price, but also to the potential magnitude of the “deflationary pressures” that may (likely) accompany such a strongly declining Gold price.

It should also be noted that various other commodities also exhibit poor “price action” and seeming further downside price vulnerability.

While I believe that Gold is influenced by many complex factors, as I wrote of in my April 27, 2011 post (“Reason’s Behind Gold’s Ascent“), I continue to believe that Gold’s greatest upside factor is that of a “safe haven.”