Currently (last updated February 4, using data through January) this “Yield Curve” model shows a 4.48% probability of a recession in the United States twelve months ahead.  For comparison purposes, it showed a 5.74% probability through December. 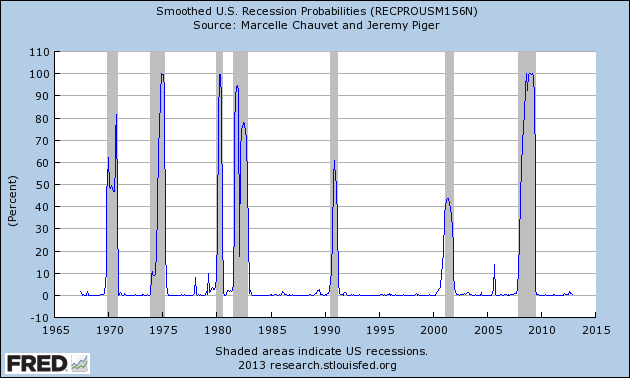 The two models featured above can be compared against measures seen in recent blog posts.  For instance, as seen in the February 8 post titled “The February 2013 Wall Street Journal Economic Forecast Survey” economists surveyed averaged a 17% probability of a U.S. recession within the next 12 months.

Of course, there is a (very) limited number of prominent parties, such as ECRI (most recently featured in the February 8 post titled “Long-Term Charts Of The ECRI WLI & ECRI WLI,Gr. – February 8, 2013 Update“) that believe the U.S. is already experiencing a recession.