The Index of Small Business Optimism fell by .1 point in September to 92.8.

Here are some excerpts from the Press Release that I find particularly notable:

Only eight percent complained that they didn’t get all the credit they wanted. Two percent say credit is their top business problem compared to 21 percent each citing taxes, regulations and red tape, and poor sales. Sales and profit trends were negative with little sign of improvement in the third quarter.

Weak sales continue to be an albatross for the small-business community. The net percent of all owners (seasonally adjusted) reporting higher nominal sales over the past three months was unchanged at a negative 13 percent, cementing the 17 point decline since April and affirming weak GDP growth for the second quarter. Twenty-one (21) percent still cite weak sales as their top business problem—historically high, but down from the record 34 percent reached in March 2010.

Another page regarding September’s NFIB findings has a chart titled “Single Most Important Business Problem – Sept. 2012” in which the top three concerns were Taxes, Gov. Reqs. & Red Tape, and Poor Sales, each with a 21 Percent reading.

Also on this page was a chart of the NFIB Small Business Optimism Index chart, as seen below: 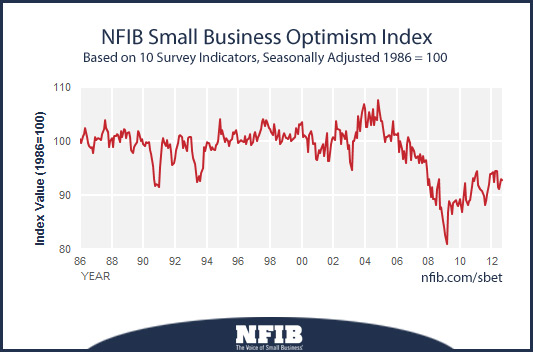