While I found several comments and forecasts to be interesting, I found a couple of statements by Frederick W. Smith regarding global trade, seen in the FedEx Earnings Conference call transcript, to be particularly noteworthy.

Here is the first:

This is Fred Smith. Let me weigh in here, Tom. I mean, fundamentally, what’s happening is that exports around the world have contracted, and the policy choices in Europe and the United States and China are having an effect on global trade. Global trade has grown faster than GDP, except for the 2000, 2001 meltdown and 2008 and 2009, for 25 years. And over the last few months, that has not been the case. So that’s what’s really going on, is that exports and trade have gone down at a faster rate than GDP has.

Here is the second:

I can tell you this on China. The locomotive that has driven China’s growth is its export industries. And with the situation in Europe and, to a lesser degree, in North America, that is a significant issue for the Chinese economy. Now the consumer consumption in China is not increasing at a significant rate, contrary to everybody’s hopes. While exports from, say, the United States into China have grown, they are dwarfed by the exports from China into the United States. And as the big economies in Europe and the U.S. have grown or contracted — grown at a far lesser rate or, in the case of certain European countries, have contracted, that’s reflected in the numbers in China. And you can’t escape that. I’ve been somewhat amused watching some of the China observers, I think, completely underestimate the effects of the slower exports on the overall China economy.

For reference, here is a chart, on a daily basis from October 2008, displaying stock prices of UPS, FedEx, the Dow Jones Transportation Index, and the Dow Jones Industrials: 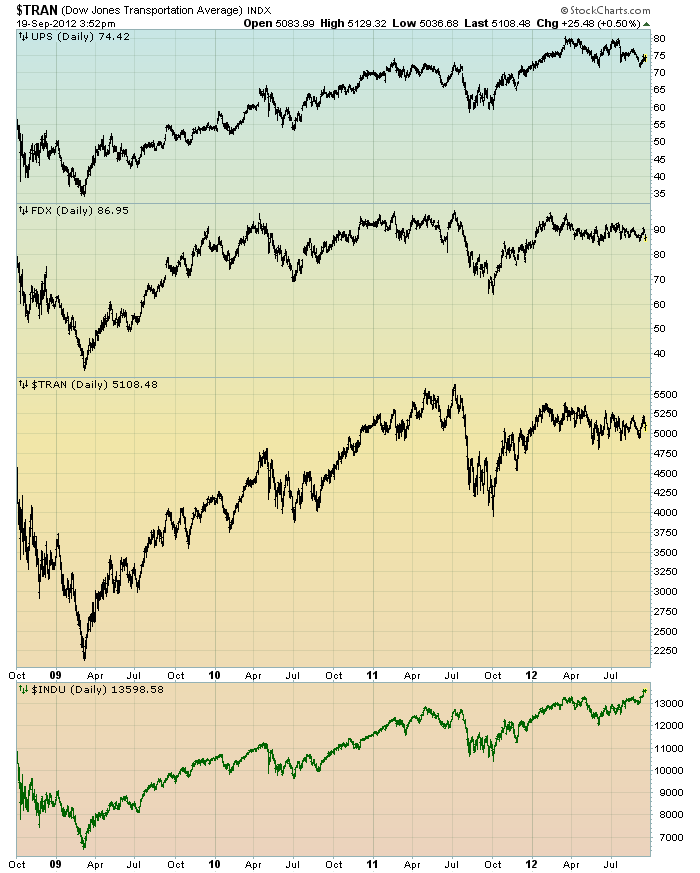