One factor that makes this unemployment situation so atypical, relative to past recoveries, is that while revenues, and particularly profits, have rebounded strongly, hiring has been (at best) anemic.  This is illustrated in the following chart, seen in the ContraryInvestor.com commentary of April 12: 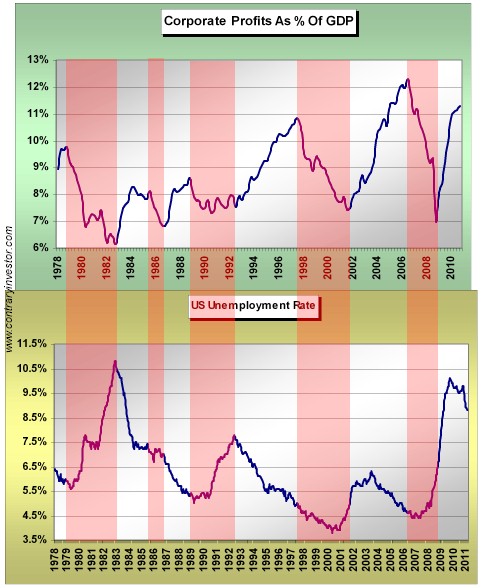 One is led to wonder when hiring will accelerate at a substantial pace.  A recent Deloitte survey of CFOs (the Q1 “CFO Signals” report) and their opinions on factors impacting domestic hiring may be an indication.   On April 14, The Wall Street Journal RTE blog summarized the report’s finding on the issue in “CFOs: Revenue Boost Needed to Boost Hiring.” As seen in the story, “The quarterly survey released Thursday found that nearly half of respondents would seriously consider adding employees if revenues rose 20%, but few would be moved by a 5% increase. A 10% bump in revenue would only be a major hiring consideration for 11% of CFOs.”  The story also contains a table indicating other factors and their importance in hiring.

The Deloitte survey, if representative of the overall hiring environment, seems to indicate that a robust amount of hiring will not be occurring for a while – and that assumes that economic growth continues.

There are many facets of this unemployment situation that go unmentioned.  Unemployment remains a very complex issue and is far more problematical than generally acknowledged.