The bond market is believed by many to be an asset bubble.  I agree with this assessment, and have written a few posts on the subject.  I discussed when it may “burst” and other considerations in an October 4 post.

The chart below shows the 10-Year Treasury Yield from the mid-90’s on a monthly LOG basis.  As one can see, the yield has been less than 4% since the latter part of 2008:

(click on image to enlarge charts)(charts courtesy of StockCharts.com)

The next chart shows a one-year daily chart with the 50- and 200-day MAs (Moving Averages).   At 2.55%, the rate is just at the 50-day moving average (shown in blue) and considerably below the 200-day MA shown in red.  From this view, it appears as if there may be some mild upward pressure on rates:

When one takes a slightly different view, by using a 13 and 34 day EMA (Exponential Moving Average) and adds the MACD indicator, however, it appears as if there may be considerably more upward pressure: 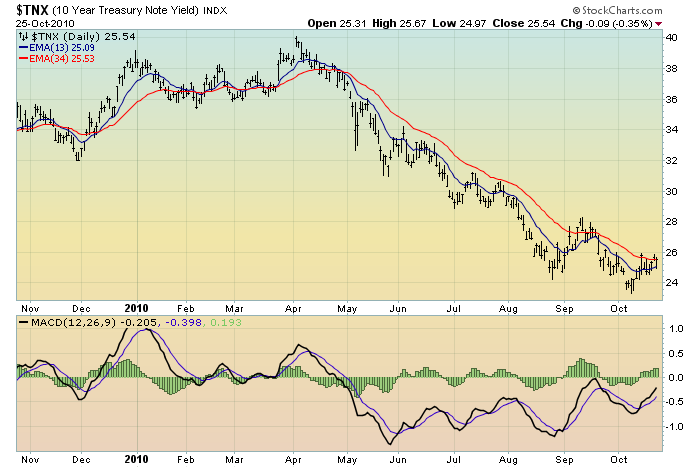 A pivotal question at this point is what impact will additional QE (Quantitative Easing) measures have on lowering rates.  As I have previously commented, “One question that looms large is whether any rate-suppression effect that additional QE may have is already “priced into” the market, as additional large doses of QE has been widely expected for a while now.”